ATLANTA , 2016-Sep-05 — /EPR Retail News/ — To thank users for making the new Chick-fil-A One™ mobile app one of the top downloaded apps following its June launch and help ease customers into the ”back to school” season, Chick-fil-A® is offering app users a free breakfast reward this month. Through Sept. 10, Chick-fil-A customers who already have a Chick-fil-A One account or download the app and create a new account will receive a free breakfast item. Options available are a Chicken Biscuit, three-count Chick-n-Minis or Chick-fil-A’s new grilled chicken breakfast sandwich, the Egg White Grill. Guests will have until Sept. 30 to redeem the offer.

“We know our customers are busy, and life gets even busier for families when kids head back to school,” said Michael Lage, senior manager of digital experience for Chick-fil-A. “Chick-fil-A One is all about making our customers’ experience even faster, more convenient and more personal than ever before. The best part is that through Chick-fil-A One, we’re able to say ‘thank you’ by surprising guests with their choice of a free breakfast when they’re in a hurry, and they can choose from one of our classic menu favorites like a Chicken Biscuit, or try something new on us.”

“Chick-fil-A One allows busy customers to get some time back in their day, by allowing them to customize and place a mobile order before arriving at the restaurant, then bypass the line inside the restaurant to pick up the order,” said Lage.

Chick-fil-A One launched on June 1, 2016, and was downloaded more than two million times in the first three days, ranking it as the No. 1 free app in the Apple App Store during that time, ahead of Snapchat, Instagram and Facebook. As of July 2, Chick-fil-A One had reached more than five million downloads.

Starting this month, Chick-fil-A is now offering a few new ways to pay electronically. Customers may wirelessly tap and pay from their phones to use Apple Pay, Android Pay or Samsung Pay independent of the Chick-fil-A One app. Within the app, Apple Pay and Android Pay can be used to add funds to a Chick-fil-A One Card.

Chick-fil-A launched the first version of its app in 2012. The company began piloting mobile ordering in 2013. All Chick-fil-A One users also have access to nutrition and allergen information and a restaurant locator.

[1] Survey was commissioned by Chick-fil-A and conducted by research firm, Russell Research.

Chick-fil-A system sales exceeded $6 billion in 2015, which marks 48 consecutive years of sales growth. Chick-fil-A earned a top spot in the 2016 Customer Service Hall of Fame for the third year in a row and is the only quick service restaurant to make the top five of the Customer Service Hall of Fame. The company was also the only restaurant brand named to the Top 10 “Best Companies to Work For” by 24/7 Wall Street. More information on Chick-fil-A is available on the chain’s website located at www.chick-fil-a.com.

ATLANTA, 2016-Jul-08 — /EPR Retail News/ — It’s time to break out the spots and cow bells for Chick-fil-A®’s 12th annual Cow Appreciation Day event on Tuesday, July 12. On that day, customers who show their spots will receive a free entree at Chick-fil-A’s more than 2,000 restaurants nationwide.

Adult customers who dress in any type of cow attire, whether it’s “head-to-hoof” or sporting a cow-spotted accessory, will be rewarded with a free Chick-fil-A entrée of their choice, such as an Original Chicken Sandwich, Grilled Chicken Cool Wrap or Chick-fil-A Chicken Biscuit. Children can receive a free Kid’s Meal for dressing in a cow costume. The Cow Appreciation Day celebration will last from store opening through 7:00 p.m. local time (check local store listings for individual store opening hours).

Customers can visit www.CowAppreciationDay.com to prepare for the occasion. Fans also can share pictures of their costumes on social media by using the hashtag #CowAppreciationDay. Additionally, all Chick-fil-A restaurants will have an active Cow Appreciation Day Snapchat filter that will allow guests to share their experience with their friends and family.

“Cow Appreciation Day is the one day where it’s okay to dress ‘udderly’ crazy and get rewarded for it,” said Jon Bridges, Chick-fil-A’s senior vice president and chief marketing officer. “The event also affords our guests the chance to explore our menu, whether they want to try some of our newer, healthier menu options, such as our Grilled Chicken Sandwich or Grilled Nuggets, or go with a classic favorite like our Original Chicken Sandwich and Chicken Nuggets.”

Chick-fil-A first introduced the Cow campaign in 1995 as a three-dimensional billboard concept depicting a black-and-white cow sitting atop the back of another cow painting the words “Eat Mor Chikin” on the billboard.  Since the first billboard two decades ago, the “Eat Mor Chikin” Cows have reached millions on television, radio, the internet and the occasional water tower to become one of America’s most popular advertising icons and a member of New York’s Madison Avenue Advertising Walk of Fame.

Atlanta-based Chick-fil-A, Inc. is a family owned and privately held restaurant company founded in 1964 by S. Truett Cathy. Devoted to serving the local communities in which its franchised restaurants operate, and known for its original chicken sandwich, Chick-fil-A serves freshly prepared food in more than 2,000 restaurants in 43 states and Washington, D.C. 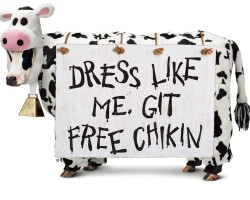 Cheshunt, England, 2015-5-11 — /EPR Retail News/ — Tesco has helped recreate the spirit of ’45 by surprising a number of party hosts across the UK with free food for VE Day street parties.

Figures revealed today also show that Tesco customers have broken records by donating over £5 million during the latest Poppy Appeal. This is the biggest ever amount of cash raised by Tesco customers during a Poppy Appeal, and compares to just over £4 million donated by customers at Tesco stores in 2013.

Tesco has a proud record of supporting the Armed Forces dating right back to the retailer’s founder Jack Cohen, who set Tesco up with his demob money after coming home from WW1. Jack himself helped out with a street party in the East End of London to celebrate VE Day in 1945.

Tesco customers are one of the biggest supporters of the Poppy Appeal in the UK, and over £30 million has been donated to the Appeal at Tesco stores since 2005.

“We think it’s very important we do our bit to remember VE Day, a particularly meaningful day in our nation’s proud history.

“Tesco stores donated free food to local street parties at the time and we want to help people celebrate all over again by supplying free cakes, sausage rolls, and other party treats.

“We are huge supporters of the Armed Forces – our customers showed incredible generosity during the latest Poppy Appeal by raising over £5 million and smashing the previous year’s total for donations. We have supported the Poppy Appeal for many years and our customers see it as a really important cause for us to be involved with.”

In October last year Tesco became the first supermarket to sign up to the Ministry of Defence’s Armed Forces Corporate Covenant, which included a pledge to provide better support for both serving and former members of the armed forces.

As part of this pledge, Tesco promised to seek out veterans who have left the armed forces for employment and to support spouses and partners of serving personnel to get jobs at Tesco stores in areas with large armed forces communities.

Special consideration is also given to holiday requests from spouses before, during and after their partner’s deployment.

Tesco is one of the biggest employers of reservists and former service personnel, and service with the Reserve Forces is actively promoted to Tesco colleagues.

Louise Ajdukiewicz, Head of Corporate Partnerships at the Legion said:

“Tesco has been a supporter of the Legion’s Poppy Appeal for over 10 years. We are delighted that in 2014 Tesco smashed all previous fundraising efforts by raising an incredible £5.3m which is £800,000 over their ambitious target for the year.

“We would like to thank Tesco customers and colleagues for this support, for which we are very grateful. The money raised will help provide practical help, advice and support to the whole of the Armed Forces Community; whether it’s helping veterans to remain independent in their homes, supporting bereaved families; ensuring people have access to the benefits they deserve or offering employment advice. All money raised will help us to continue this support and help us to uphold the memory of the fallen and support the future of the living, so once again, thank you.”