​ALEXANDRIA, VA, 2016-Apr-14 — /EPR Retail News/ — Two in three U.S. fuel consumers (64%) say that they expect gas prices to rise over the next 30 days, an 11-point jump from a month ago and the highest percentage of Americans expecting price increases since May 2015 according to the results of a new consumer survey released today by the National Association of Convenience Stores (NACS).

Nationally, consumers report that gas prices increased 20 cents per gallon last month, and 64% say that they noticed an increase in prices. Prior to March, U.S. fuel consumers had reported declining prices every single month since June 2015.

The increase in gas prices may have contributed to a decrease in economic optimism. Less than half (44%) of U.S. fuel consumers say they are optimistic about the economy, down from 50% in March 2016. As in previous months, younger fuel consumers are more optimistic about the economy than older Americans: 52% of 18-34 year olds report feeling optimistic, compared to 40% of those over age 50.

“Gas prices historically increase in April as the petroleum industry undergoes the annual transition to produce and sell summer-blend fuels, but the percentage of Americans who expect prices to increase is at its highest level for April since we initiated our monthly surveys in 2013,” said Jeff Lenard, NACS vice president of strategic industry initiatives. “While prices are relatively low compared to previous Aprils, there is still considerable angst across the country related to further prices increases.”

Despite consumer concerns about gas prices, there may be some good news for retailers. Nearly one in four Americans (23%) say that they will spend more money shopping for items besides gas over the coming month, the highest percentage since December when consumer spending peaks for the holiday shopping season. More than two in five (42%) of consumers ages 18-34 say that they will shop more over the coming month.

The NACS Retail Fuels Report (www.nacsonline.com/gasprices) examines a variety of issues related to fueling, with more than 20 backgrounders including a report on Why Prices Historically Go Up in the Spring.

NACS, which represents the convenience store industry that sells 80% of the gas sold in the country, conducts monthly consumer surveys to gauge how gas prices affect broader economic trends. The NACS survey was conducted online by Penn Schoen Berland; 1,100 U.S. adults who purchase fuel for a vehicle such as a car, truck, or van at least once per month were surveyed April 5-7, 2016. Summary results are available at www.nacsonline.com/gasprices. 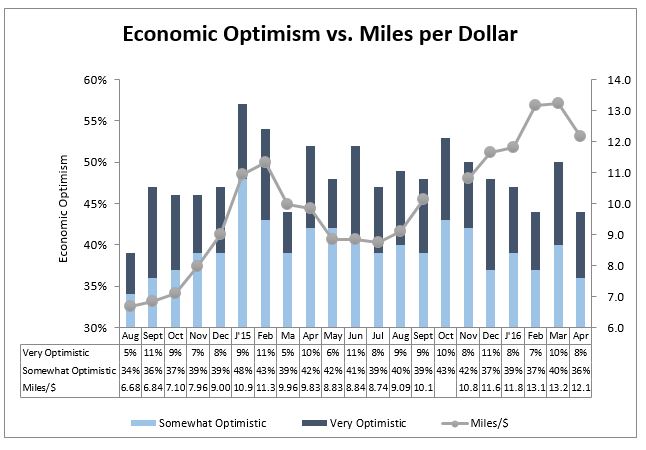 Founded in 1961 as the National Association of Convenience Stores, NACS (nacsonline.com) is the international association for convenience and fuel retailing. The U.S. convenience store industry, with more than 154,000 stores across the country, posted $696 billion in total sales in 2014, of which $483 billion were motor fuels sales. NACS has 2,100 retail and 1,700 supplier member companies, which do business in nearly 50 countries.