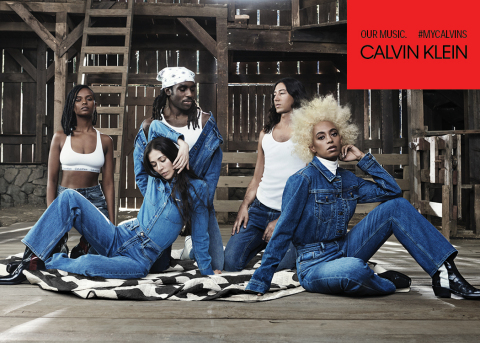 The group is shot together as a “chosen” musical family, illustrating the overarching message of the campaign. The evolved #MYCALVINS concept has family at its center, a display of unity between strong individuals, further emphasized by the symbolism of the traditional American quilt. This campaign captures these bonds and brings to life different ways we can inspire families – both born and made – to connect with one another, and celebrate the things that unite us.

This launch marks the first moment of the new Our Family. #MYCALVINScampaign rollout, with a series of campaign launches that will run from Holiday 2017 through the Spring 2018 season. The talent featured will represent the bridging of several generations stylistically, musically and culturally. They will bring their stories to life as “Our Family” with family and community at the epicenter of the conversation.

For the first time, the brand is embracing a digital first, socially powered mindset in communicating the evolution of the globally successful #MYCALVINS campaign originally launched in 2014. The #MYCALVINS campaign leverages influencers’ and existing consumer behavior to express themselves, and maximizes the cultural ‘selfie’ and viral image-sharing phenomenon. With dedicated digital support in 12 countries and key high impact outdoor in several key markets throughout the holiday season, the Our Family. #MYCALVINS initiative will be communicated to a global audience.

CALVIN KLEIN is a global lifestyle brand that exemplifies bold, progressive ideals and a seductive aesthetic. We seek to thrill and inspire our audience while using provocative imagery and striking designs to ignite the senses.

Founded in 1968 by Calvin Klein and his business partner Barry Schwartz, we have built our reputation as a leader in American fashion through our clean aesthetic and innovative designs. Global retail sales of CALVIN KLEIN brand products exceeded $8 billion in 2016 and were distributed in over 110 countries. CALVIN KLEIN employs over 10,000 associates globally. We were acquired by PVH Corp. in 2003.

With a history going back over 135 years, PVH has excelled at growing brands and businesses with rich American heritages, becoming one of the largest apparel companies in the world. We have over 35,000 associates operating in over 40 countries and over $8 billion in annual revenues. We own the iconic CALVIN KLEIN, TOMMY HILFIGER, Van Heusen, IZOD,ARROW, Speedo*, Warner’s and Olga brands, as well as the digital-centric True & Co. intimates brand, and market a variety of goods under these and other nationally and internationally known owned and licensed brands.

*The Speedo brand is licensed for North America and the Caribbean in perpetuity from Speedo International Limited.