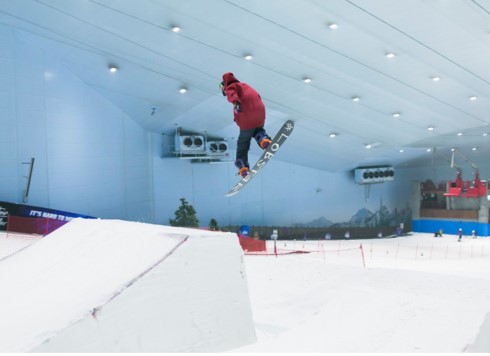 The first-ever UAE National Ski and Snowboard Championships at Ski Dubai, December 8 and 9, 2017

Dubai, United Arab Emirates, 2017-Dec-08 — /EPR Retail News/ — Under the patronage of Dubai Police and the Community Sport initiative of H.H Sheikh Hamdan Bin Mohammed Bin Rashid Al-Maktoum, Crown Prince of Dubai – Chairman of the Executive Council for Dubai Government and Chairman of the Dubai Sports Council, Majid Al Futtaim, the leading shopping mall, communities, retail and leisure pioneer across the Middle East, Africa and Asia, is organising the first-ever UAE National Ski and Snowboard Championships at Ski Dubai. The championships are also supported by the UAE National Olympics Committee and UAE Ice Sports Federation and Dubai Sports Council and will be held on December 8 and 9, 2017.

The National Championships are organised as part of Ski Dubai’s on-going efforts to promote snow sports in the country, and fulfil one of the key requirements laid out by International Ski and Snowboard Federation (FIS) for membership. Once the UAE receives membership to FIS, snow sports athletes from the country will be allowed to compete internationally for the first time.

This is exciting news for snow sports athletes and enthusiasts in the UAE, who will no longer be restricted to local and regional events and can now aspire to make a mark on an international stage. The UAE National Ski and Snowboard Championships herald a new era for snow sports in the country, which continues to go from strength to strength since the inception of Ski Dubai.

The championships, which are divided into four snow sports disciplines, will see more than 200 top athletes from the UAE, many of whom have honed their skills on the slopes of Ski Dubai, battle it out for the title honours. The first day will witness the UAE Alpine Ski Championships with athletes participating in the fiercely competitive Alpine speed disciplines of Slalom Skiing and Giant Slalom. The second day will feature the UAE Freestyle Ski and Snowboard Championships under two freestyle disciplines: Slopestyle and Big Air. The competitions will be adjudicated by a panel of four distinguished international judges, headed up by World Cup judge Martin Carr. Other renowned international guests and judges on the panel include: Gorgio Rocca, winner of 11 World Cup races in Alpine skiing and four times Olympic Champion, Halldór Helgason, winner of 2010 X-Games in Snowboard Big Air discipline and Sparrow Knox, the up and coming British Snowboarder.

Over the past decade, Ski Dubai has been committed to creating and supporting local talent and has helped lead the way in building and growing snow sports in the UAE. From organising regular freestyle nights and races at its state-of-the-art facilities, to mentoring, coaching and encouraging young athletes to develop their skills to an international standard, years of continued work by Ski Dubai and its partners has now come to fruition in the shape of the first-ever UAE National Ski and Snowboard Championships.

Commenting on the championships, Ahmed Galal Ismail – CEO at Majid Al Futtaim Ventures said: “We are proud to host the inaugural UAE National Ski and Snowboard Championships at Ski Dubai. We are committed to fostering snow sports talent in the country and our goal is to make the UAE and Ski Dubai an international destination for the sport. With approximately one million visitors per year, which is on par with the international benchmark for major ski resorts, Ski Dubai is poised to become one of the major global destinations for Ski and Snowboard Championships. It is immensely fulfilling to see world-class athletes, many of whom have learned and refined their craft at Ski Dubai, creating great moments as they take part in this prestigious event.”

Colonel Khaled Ali Shahil, General Director of the Community Happiness Department at Dubai Police added: “We support every activity that is aimed at bettering the lives of citizens and residents of the UAE. The UAE National Ski and Snowboard Championships are opening new avenues to promote snow sports in the country and develop home-grown talent in the field. This will eventually lead to the formation of the UAE National Ski and Snowboarding team, which is a matter of great pride for the nation and will bolster the country’s stature on the international snow sports stage.”

Dubai Police in association with the Dubai Positive Soul initiative and the Dubai Sports Council, along with the UAE Olympics Committee, are providing valuable logistical and strategic support for the first UAE National Ski and Snowboard Championship event. Dubai Police are Ski Dubai’s esteemed partner, and have played an integral part in the pre-planning of the Championships. As part of this they have generated a huge amount of support for this event, engaging a number of sponsors including ENOC, Aqdar, Sheraton, Empower, Emirat, Emirates NBD, Dutco and Capriole. In addition, Ski Dubai would also like to thank their sponsors including; ZSI Trading, Rosinol and Spyder, as well as and Burton who are proud partners and sponsors of the Ski Dubai Alpine and Freestyle team.

Commenting on the championships, HE Saeed Mohammed Hareb, Secretary General of Dubai Sports Council said: “H.H Sheikh Hamdan Bin Mohammed Al Maktoum, Crown Prince of Dubai – Chairman of the Executive Council – Chairman of the Dubai Sports Council has launched several initiatives to promote an active lifestyle among the residents of the UAE, and Ski Dubai’s launch of the National Championships is in line with that vision. The UAE National Ski and Snowboard Championships, will boost the awareness of snow sports in the country and attract new people to the sport, whilst globally showcasing the talented athletes to emerge from the UAE.”

Ski Dubai recently announced the launch of its Sponsored Athletes team with an impressive roster of experienced coaches, who will guide the athletes over the coming years. The line-up includes: Mohamed Moulay, a former Moroccan National Ski Team member and experienced race coach, James Machon, a former Great Britain Olympic Freestyle skier and Mike Barker, whose experience includes five years as a coach of the British Children’s team. The entire project is headed up by Chris David, Snow Sports Operations Manager at Ski Dubai. Chris is a former GBR athlete and was Head Freestyle Moguls Ski Coach for Great Britain.