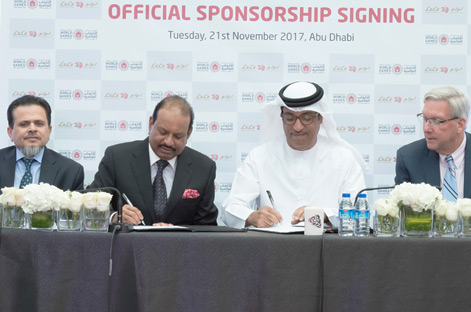 His Excellency Mohamad Abdulla Al Junaibi, Chairman of the Abu Dhabi World Games Higher Committee, signed the agreement with Mr. Yussuf Ali MA, Chairman of LuLu Group International. As part of the agreement, LuLu will be working alongside Special Olympics’ local organizing committee on a series of in-store and mall activations ahead of the Games and will also be committee to employee volunteering and fundraising activities.

His Excellency Mohammed Abdulla Al Junaibi, comments: “We are grateful and excited to be working with LuLu Group International on the Games. LuLu Group embodies several of the values that the Games are based on, such as tolerance and living in harmony with one another. LuLu’s support will help ensure we put on the most unified Games in history and that we can spread our message of tolerance, unity and inclusivity far and wide.

“The Games are of huge significance to this region and I hope everyone will follow the example of Mr Yussuf Ali. I am so proud that even my own wife and daughter have signed up to volunteer and we are looking forward to everyone else to get involve”

Mr. Yussuf Ali MA, comments: “It is our proud privilege to associate with such a humanitarian international event which is going to further strengthen Abu Dhabi’s and UAE’s image as one of the most benevolent countries in the world. I look at this partnership not just as a sponsorship agreement, but as a concrete step towards making this world take note of people with special abilities and offers them greater role in life.”

The Special Olympics World Games is a global event that takes place once every two years catering to athletes of determination with intellectual disabilities. It represents the highlight event of the global Special Olympics movement. Abu Dhabi will become the first city in the Middle East and North Africa to host the prestigious Games. The event from 14 to 21 March 2019 will draw in more than 7,000 athletes from 170 nations, making it the world’s largest sporting and humanitarian event.

Thousands of overseas visitors are expected to fly into the UAE to watch the action, while Special Olympics’ estimates of 500,000 spectators would make the event the largest ever attended in the UAE capital.