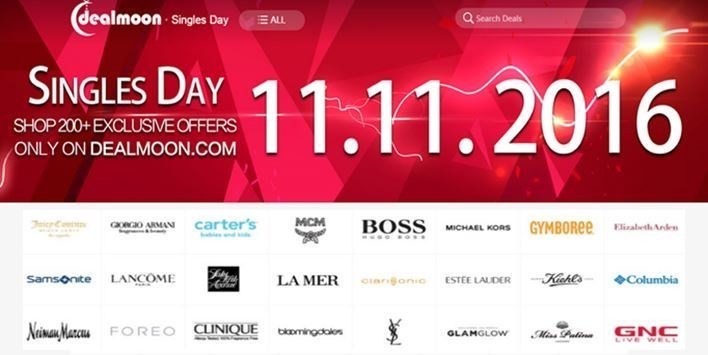 UNION CITY, Calif., Nov. 15, 2016 – /EPR Retail News/ — Dealmoon.com, the company that introduced Singles’ Day to U.S. retailers after Alibaba declared it an online shopping holiday, has caused it to mushroom into the new American Cyber Monday for luxury brands. On 11/11, Dealmoon.com attracted America’s largest luxury department stores and 250 brands to kick off their holiday selling season; some reaping $2M. With an estimated sales increase of 40% over last year, Dealmoon’s growth topped Alibaba’s reported 6% sales increase (from $14 to $17B) this year, and brands state that 70% of the Dealmoon-referred shoppers on 11/11 were new customers for them.

“54% of our sales were in the beauty category, 31% apparel, shoes and handbags, 8% electronics and 7% home goods,” said Jennifer Wang, CMO and Co-founder of Dealmoon.com. “In the fashion category, our customers’ most favorite products were Stuart Weitzman boots, Michael Kors MK handbags, a Burberry cashmere scarf, UGG boots, a Canada Goose parka, Prada and Burberry sunglasses, Adidas Stan Smith sneakers, Pandora Jewelry, Chloe bags and one of our all-time bestsellers: Salvatore Ferragamo pumps. In the tech category, our users favored Apple, followed by Dell, Microsoft, Samsung and Lenovo. The most popular brands in the home category began with Samsonite, then Philips, KitchenAid and Panasonic.”

Dealmoon.com attracts the “rising Middle Class” of mostly 25-34-year-old millennial shoppers of Chinese descent who, familiar with the Chinese-born online shopping holiday, have a propensity to spend on 11/11. Year-round, Dealmoon.com is a shopping destination for Chinese-Americans, however on 11/11/16, 61% of Dealmoon.com users were Chinese-Americans, another 29% from mainland China and the rest from those in other parts of the world.

“Our growth this year can best be expressed by saying that multiple retailers made over $2M in sales this Singles’ Day, which doubled sales records in 2015,” added Wang. “In general, we are seeing our customers interested in higher-end products.  Instead of a $49regular hair dryer, they are buying the newest $399 Dyson Supersonic hair dryer.”

Dealmoon.com, the luxury brand aggregator that serves a voracious 6M audience of Chinese shoppers, is now preparing for their Black Friday and Cyber Monday sales.

About: Dealmoon.com is the gateway to 6M Chinese-American e-shoppers.  An aggregator of luxury deals served up specifically to this brand-hungry shopper, Dealmoon attracts 24M monthly visits, has 8.5M social followers and the mobile app has been downloaded over 3M times. With a stunning 516 Alexa rating, Dealmoon.com is one of the world’s leading cross-continental B2C advisory websites with offices throughout the U.S. and China.  Dealmoon’s shopping advisors make product recommendations on exclusives and deals in categories from beauty, apparel, shoes and handbags to electronics, nutrition, baby, home, travel and finance.  Some of the world’s loftiest brands and most revered retailers and e-tailers are offering deals there; in fact, a single posting on Dealmoon has decimated some brands’ entire inventories in a day or two. With its massive leverage, Dealmoon introduced China’s annual Singles’ Day to North American luxury retailers. The rapidly expanding shopping event has been featured in TIME magazine, NASDAQ, The Huffington Post, Luxury Daily and Internet Retailer. Dealmoon.com publishes more than 400 best-of-web deals per day in both English and Chinese. For more information, visit www.Dealmoon.com.