POLAND, 2015-11-12 — /EPR Retail News/ — Sadecki Bartnik, a company that makes honey for distribution under Carrefour’s own brand, has won the “Major climate challenge for suppliers” competition in Poland for its “Let’s help the bees – the bees will help us” project.

The panel awarded the major prize to the “Let’s help the bees – the bees will help us” project developed by Sadecki Bartnik, a Polish company that strives to preserve the planet’s biodiversity by protecting bees and phasing out the use of pesticides. Representatives from the company will be in Paris on 19 and 20 November to take part in the final event which will feature winners from the Group’s 10 integrated countries. The winning company will have an advertising campaign running in hypermarkets for 1 month.

Other prizes were awarded to:

– Bonduelle Poland for its zero-till project which is designed to protect soils’ ecosystems.

– Delitissue for its installation of a gas turbine which has drastically reduced its CO2 emissions and energy consumption. 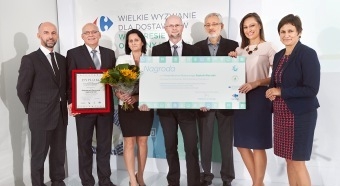