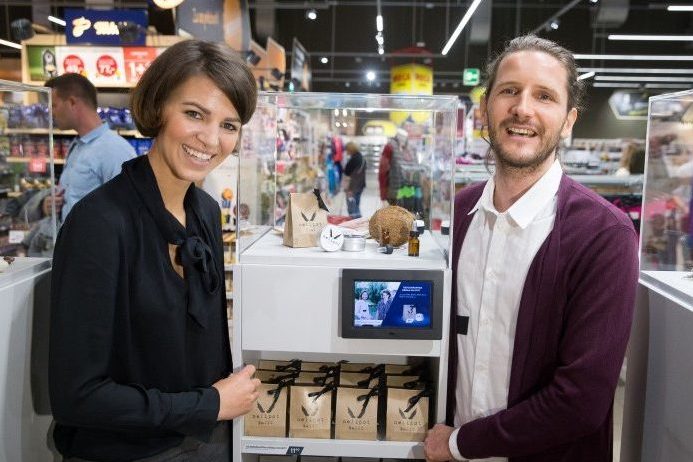 SPAR Slovenia announces the winner of its Start It Up, Slovenia! Project

Slovenia, 2017-Oct-20 — /EPR Retail News/ — Twelve ideas, twelve products, one winner. SPAR Slovenia together with the Formitas Agency and POPTV broadcasting company, entered into an innovative seven-month partnership to give young Slovenian entrepreneurs the chance of an exclusive business opportunity with the possibility of winning a long-term contract with SPAR.

With the possibility to enter open to anyone, many applications were received from which 12 start-ups were chosen and given the opportunity to win the title Hit product 2016. POP TV, the most popular TV channel of the country, aired 10 innovative one-hour shows between September and December 2016, featuring the products which kicked off the race and revealing the touching personal stories behind the creations.

Instore, digitally equipped shelves were used to interactively present the stories of the products and their creators. Personal sales promotions by candidates added an additional personal approach. SPAR Slovenia also mentored the candidates and gave its commitment to sell the winning product in SPAR stores nationwide.

Start it up, Slovenia! was promoted through various channels including TV coverage, the show’s web page, Twitter, Facebook, Instagram, YouTube and SPAR Slovenia’s own website. All of the communication consistently invited everyone in Slovenia to support their favourite start-ups by purchasing their products, helping to make at least one of them the winner.

The young entrepreneurs were delighted but overwhelmed: “This moment represents our future, freedom and repayment for all our efforts. When we signed the contract with SPAR, we felt incredibly proud, but at the same time it is a great responsibility to stay relevant to the market and become even better with SPAR as a partner.”

In addition to the winner, who produced Nelipot handmade natural deodorant, nine other young start-ups signed a contract with SPAR. Another remarkable result was the fact that the products from seven entrepreneurs remained category leaders in SPAR stores up to three months after the TV show ended.

SPAR Slovenia attracted younger customers through this initiative, changed the perception of the brand, gained 12 unique products, which differentiated the retailer from others, achieved strong sales results and benefited from a lot of publicity and coverage in social media.

Igor Mervič, Managing Director at SPAR Slovenia, is enthusiastic about the Start It Up, Slovenia! project, and is optimistic that the story will continue: “I am convinced that all entrepreneurs have great opportunities to succeed. With nine, we have signed one year contracts. I congratulate them on everything they have been able to accomplish.”

The 10 TV-shows were aired every Sunday evening, presenting the stories of 12 young and innovative Slovenian entrepreneurs. After each episode, the new business heroes were interviewed and featured in business and lifestyle articles, advertorials, SPAR media (leaflets and magazine), and in SPAR TV ads.

The success of the promotion of entrepreneurship amongst producers in Slovenia resulted in recognition at the WARC Innovation Awards 2017, which awarded silver to the campaign for being one of the most innovative in the world. Marketing Magazine awarded Best Marketing Campaign in the Adriatic region, whilst the Slovenia Advertising Festival awarded the grand prize for the best integral communication campaign. The campaign also won the 2017 AmCham Award for Innovation.

The success and international recognition of this campaign exceeded all expectations. The show became something of a movement in Slovenia, reflecting the current global trend of a generation that wants to positively impact the world. Due to the great success, the second season was launched in September 2017. Eight young entrepreneurs are once again competing to win the support and loyalty of SPAR customers in Slovenia.

Watch for yourself this short clip showcasing the entrepreneurial spirit of SPAR Slovenia Start It Up!