SEATTLE, 2016-Aug-25 — /EPR Retail News/ — Nordstrom is expanding its in-store boutique SPACE to four additional stores in Los Angeles, Nashville and Toronto, thereby doubling the number of locations since its launch one year ago.

SPACE initially launched exclusively in the retailer’s flagship locations, yet now expands to new markets known as shopping destinations. On August 24th, SPACE will open at The Mall at Green Hills in Nashville, Tenn. followed by The Grove in Los Angeles on August 26th. Nordstrom will open its first Toronto store on September 16 at Eaton Centre, followed by Yorkdale Centre on October 21. Both will open with SPACE.

“These cities are known for their amazing fashion and the people there have such a strong sense of individual style,” said Kim. “We want to make a statement with our stores in these markets and identify them as destinations for fashion, style, art and culture. Our customers are really curious and educated about fashion, and part of our goal with SPACE is to create a platform to introduce our customers to this side of designer fashion – this place where the directional collections or up-and-comers have a place to live and grow.”

The boutique was designed with artistic elements and pops of color to distinguish it from the rest of the retail floor – think pink mannequins, mixed materials and art objects to accent the area. Kim worked with the Nordstrom design team to create a framework that feels open and airy to allow customers to flow in and out of the boutique, then decorated each with work from artists, furniture makers and artisans so each feels uniquely warm and inviting.

To celebrate the launch of SPACE in Toronto, Kim and the Creative Projects team created a special capsule collection of exclusive ready-to-wear and accessory items from Canadian designers Brother Vellies, Steven Tai, WWAKE and Vejas. The capsule collection will be available in-store only at SPACE Vancouver and Toronto locations.

This fall, SPACE will be found in the following Nordstrom stores and online:

ABOUT NORDSTROM
Nordstrom, Inc. is a leading fashion specialty retailer based in the U.S. Founded in 1901 as a shoe store in Seattle, today Nordstrom operates 329 stores in 39 states, including 121 full-line stores in the United States, Canada and Puerto Rico; 200 Nordstrom Rack stores; two Jeffrey boutiques; and one clearance store. Additionally, customers are served online through Nordstrom.com, Nordstromrack.com and HauteLook. The company also owns Trunk Club, a personalized clothing service serving customers online at TrunkClub.com and its five clubhouses. Nordstrom, Inc.’s common stock is publicly traded on the NYSEunder the symbol JWN.

ABOUT OLIVIA KIM
Olivia Kim joined Nordstrom in February 2013 in a then newly-created position of Creative Projects Director. Kim was named Vice President of Creative Projects in September 2015. In her role, Kim focuses on creating energy, excitement, and inspiration throughout the retailer’s locations through new and unique experiences, curated partnerships, the Pop-In@Nordstrom series of pop-up shops and in-store boutique SPACE. Additionally in 2016, Kim took on the role of creative director for company’s brand campaigns. The Spring 2016 campaign under her direction was Nordstrom’s first brand campaign in 15 years.

She launched her first initiative, Pop-In@Nordstrom, in October 2013. Pop-In is an ongoing series of themed pop-up shops, each with a curated mix of new, often exclusive merchandise spanning the high/low price range. The series was built on a monthly rotation to keep customers coming back to discover new brands, and create a fun and compelling experience in stores and online. Past partnerships have included: Aesop, Warby Parker, Nike, Opening Ceremony, VANS, Hong Kong fashion collective I.T., and Danish home goods brand HAY.

A prominent figure in the fashion industry, prior to joining Nordstrom Olivia was a founding member of and Vice President of Creative at Opening Ceremony where she was responsible for the retailer’s leadership in merchandising and store planning, art direction, and collaborative projects. Kim has played an essential role in launching emerging designers such as Suno, Pamela Love, and Patrik Ervell. Kim is a long-time champion of emerging designers, which is evident in her brand selections in SPACE and Pop-In shops. In 2015, Kim was selected to join the prestigious ANDAM jury, which supports young designers. 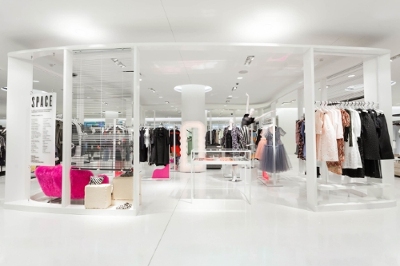