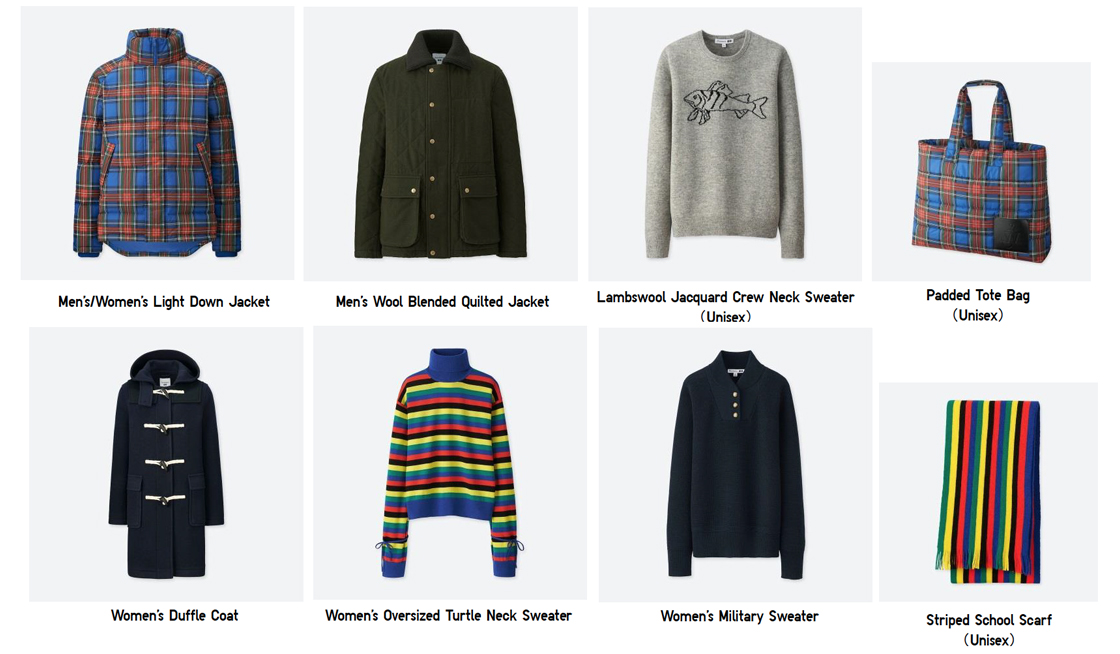 Japan, 2017-Jul-20 — /EPR Retail News/ — UNIQLO today (2017.07.18) unveils its new collaboration line with JW ANDERSON, an internationally renowned fashion brand from London. The fall/winter 2017 range comprises 33 pieces for men and women, and it will roll out at UNIQLO stores and UNIQLO.com from Tuesday, September 191.

The new line features British classics that combine the signature bold and graphic design esthetic of JW ANDERSON with UNIQLO’s excellence in fabrics, fit and functionality. The result is a collection that offers the best of British styling that is at once traditional and modern while providing daily lifestyle options for men and women of all ages.

Commenting on the launch of the much anticipated line, Jonathan Anderson, the founder of JW ANDERSON, said, “For me, the point of doing this collaboration was that I believe in democracy in fashion, and what I hope will be achieved is that any age demographic can pick up and find something within the collection to relate to. Doing something with UNIQLO is very interesting. It means you come up with a wardrobe which is universal and quirky.”

Yuki Katsuta, Senior Vice President of Fast Retailing and Head of Research and Design at UNIQLO, said, “This line embodies our shared vision of offering elegance, simplicity, timeless comfort, and individuality through LifeWear. The inspiration for much of the clothing we wear today was the uniforms, work wear, and sportswear that originated in the British Isles. We have combined the energy, creativity, and traditional touches of JW ANDERSON with our fit, fabrics, and functionality, as part of our quest to craft wardrobe essentials that are enduringly appealing.”

1. The collection will roll out on September 19 in the UK, followed by other markets around the world. Availability of the 33-piece range will vary by country and store.

Design is a key focus for the collection, notably through such classics as a double-breasted belted Trench Coat, the Wool Blended Quilted Jacket, the Fair Isle Sweater, and the Striped Scarf. The UNIQLO and JW ANDERSON Trench Coat is accented by a tartan lining. A selection of down jackets, shirts, and padded tote bags also employs tartan. The new collaboration line includes multi-border cut and sewn pieces, knits, and stoles in vivid hues, as well as ruffle blouses and skirts. Such items as the Wool Blended Quilted Jacket and the Padded Tote Bag, feature a faux leather patch with the anchor logo, for an unmistakably JW ANDERSON touch.

The entire 33-piece collection incorporates traditional British materials combined with UNIQLO trademark fabrics. There are Tweed coats in signature herringbone and shirts in extra fine cotton that feels smooth and natural, as well as knits in Extra Fine Merino for an elegant, glossy sheen.

The silhouette is also a key feature for the line. The look ranges from long coats with contemporary button and waist belt styling to jackets that give a modern, slim and sophisticated look but also allow for layering, and includes a turtle neck sweater with boxy silhouette and an oversized knit dress.

Keeping people as warm as possible is another central consideration. Examples include HEATTECH scarves and down jackets that employ ribbed cuffs and feature zipper tape so people can keep gloves on as much as possible in winter.

A total of 14 women’s items

See the UNIQLO website below for more details: https://www.uniqlo.com/jwanderson/jp/

About the JW ANDERSON brand

Northern Irish designer Jonathan Anderson established JW ANDERSON in 2008. At first an elaborate collection of accessories, it quickly attracted attention and enabled the fledgling label to show on-schedule during the 2008 London Fashion Week season. The success of this debut collection earned both critical acclaim and commercial success for Anderson, whose label is now regarded as one of London’s most innovative and forward thinking brands.