The new feed has led to the first farmed salmon with a fish-in, fish-out ratio below 1-to-1, earning it a “Good Alternative” rating from Monterey Bay Aquarium Seafood Watch® program, a rare mark for farmed salmon. Other salmon farms have ratios that average approximately 1.6-to-1, though Whole Foods Market’s aquaculture standards have target ratios of 1-to-1, which In the Blue worked to exceed.

Unlike conventional feeds, which are produced with fish caught solely for feed, In the Blue is made with trimmings from wild-caught fish that are already bound for human consumption. The trimmings are pressed into oil that is cleaned to reduce environmental contaminants like heavy metals and PCBs (Polychlorinated biphenyls). Because environmental contaminants found in farmed fish are predominantly passed through feed ingredients, removing those substances from the oil keeps them out of salmon that end up on dinner plates.

The production method for this salmon feed was developed by connecting existing capabilities. The trimmings are sourced from established wild-caught seafood processors, and the oil-cleaning technology is already common in producing fish oil supplements.

This salmon is sold at Whole Foods Market, which launched its rigorous farmed salmon standards in 2007 and has continued to strengthen the requirements every year since. The company implements this continuous improvement process, which includes third-party-audited metrics for fish-in, fish-out ratios and contaminant levels among the other standards, to create a model of more sustainable aquaculture for the industry. Blue Circle Foods, BioMar and the fish farmers worked to exceed these standards with In the Blue feed.

“We knew we’d have to make a significant investment of time and budget to create this custom feed for only two farms, but the risk was definitely worth it when we saw the difference this process could make for consumers, the industry and our planet,” said Vidar Gundersen, Group Sustainability Manager for BioMar. “This kind of innovation is only possible because of the inspiration and partnership with Blue Circle Foods, and the purchasing commitment from Whole Foods Market. Together, we believe this farmed seafood approach will help feed the world sustainably, safely and, of course, deliciously.”

“This new process for fish feed is so exciting because it’s exactly the kind of industry-leading solution that we hoped would result from Whole Foods Market’s Responsibly Farmed standards,” said Carrie Brownstein, seafood quality standards coordinator for Whole Foods Market. “We developed ambitious yet achievable standards to create a model of more sustainable aquaculture, and we are thrilled to see In the Blue bring that to life with better farmed salmon for our shoppers, and a better example for the industry at large.”

In addition to meeting Whole Foods Market’s Responsibly Farmed standards, In the Blue earned Blue Circle’s farmed salmon a “Good Alternative” rating from Seafood Watch. The program defines “sustainable seafood” as seafood from sources, whether wild-caught or farmed, that can maintain or increase production without jeopardizing the structure and function of affected ecosystems. This net gain of protein that Blue Circle Foods has achieved by using trimmings helped meet those sustainability goals.

Going forward, all stakeholders involved – BioMar, Blue Circle Foods and Whole Foods Market – hope the model created for farmed salmon feed can become common practice, and eventually expand to other species. The sooner the market will support this kind of growth, the industry and consumers alike can expect this highest quality farmed seafood to become an even more affordable, sustainable protein option. 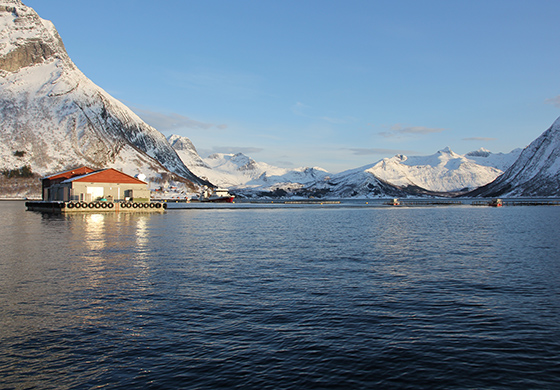