LONDON, 2015-9-25 — /EPR Retail News/ — Lidl UK has announced that it will adopt the Living Wage from 1st October 2015, as part of the supermarket’s ongoing commitment to investing in its employees following a record year with sales reaching over £4billion.

The introduction is the first from a British Supermarket and will mean that all Lidl UK employees receive a minimum of £8.20 per hour across England, Scotland and Wales, and £9.35 per hour in London. This will be an average wage increase of £1,200 per year, with 53% of Lidl UK’s 17,000 workforce and all age brackets benefiting from the rise.

“We recognise that every employee forms an integral part of team Lidl, and each individual’s contribution is valued. It’s therefore only right that we show our commitment, in the same way that the team commit to the business and our customers each and every day, by ensuring a wage that supports the cost of living.

“As a result, Lidl employees will be amongst the best paid in the supermarket sector, and that’s something I feel incredibly proud about.”

The Living Wage represents an £9m investment by Lidl UK into its employees, and is the latest example of the commitment that the business is making to them. The announcement follows Lidl achieving a record UK market share of 4.1% (as reported by Kantar Worldpanel last month) and being named as Grocer of the Year at the Grocer Gold Awards. Lidl UK was also listed as one of the top supermarkets for Customer Service by Which? In its September 2015 report on the Best and Worst Brands for Customer Service.

The supermarket’s continued growth follows a huge increase in customer numbers, with half of UK households shopping at Lidl in the last year and many now choosing it as the destination for their main shop, recognising the winning quality and value combination that is on offer. 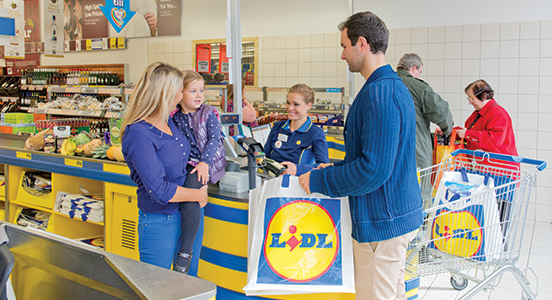 Lidl UK will adopt the Living Wage from 1st October 2015