These three distinct images on Starbucks reusable cups were designed by baristas who won the first White Cup Contest for partners (employees). The new cups are available now, while supplies last, in participating U.S. and Canada Starbucks® stores.

Meet the designers and find out how purchasing one of the cups helps Starbucks partners support each other: 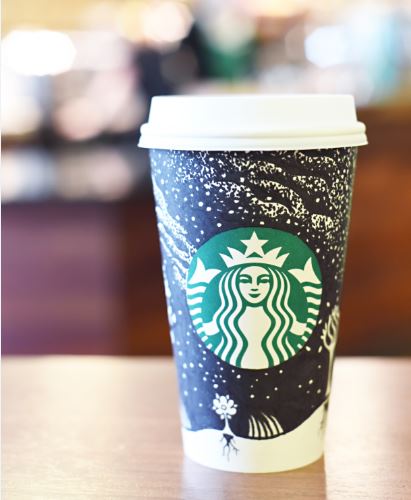 Drawing, space and science fiction are three things Ben Cowley has been interested in from an early age. Growing up in England, he spent hours drawing space ships, the solar system and galaxies with his brother.

“I’m super interested in everything NASA does and often spend time looking through images from the Hubble Space Telescope,” said Cowley, who has a degree in photography. “I’ve always loved the night sky as well.”

Cowley has also always loved coffee, which he admits defies the cliché of “an Englishman who needs his tea.” He met his wife, who’s from Texas, while studying in England. They moved to the U.S. years ago and he “jumped at the chance” to work for Starbucks in Austin.

“It combines my love of talking with people and being a part of the coffee experience. I couldn’t be happier to be with Starbucks.”

For his design, Cowley covered an iconic Starbucks cup with a dark sky, allowing a comet, tree, plant and moon to appear in white. He hopes anyone who purchases his design will think about the environment when they use the reusable cup.

“We are obligated to take care of the resources we have around us, and I think we have a responsibility to keep the beauty of our planet intact,” Cowley said. “Maybe the cup will inspire someone to just take a look upwards the next time it’s a beautiful, clear night. That would be nice.” 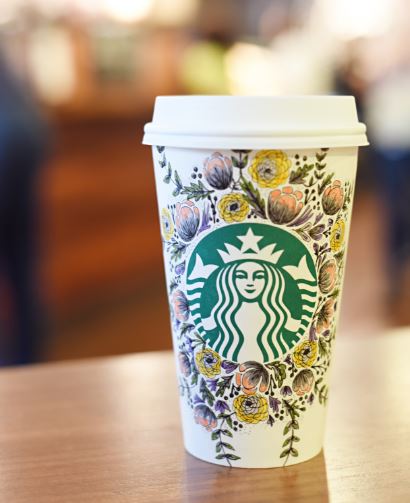 Scandinavian immigrants brought their Nordic traditions with them when they arrived in Poulsbo, Washington in the late 1800s. Those included a style of art that Brynn James learned as a child and incorporated into her design.

Rosemaling is a decorative form of folk painting that began in eastern Norway around the 1700s. People who rosemaled for their livelihoods back then were generally poor. They traveled from county to county to paint for the wealthy, and much of their work was done in churches.

“The art is a big part of my life and heritage,” said James, who recently left the company to spend more time with her family. “The style is reflective of Nordic folklore and fairytales, and more than anything it’s whimsical. There are a lot of dark, gloomy days back there, so the art is a reminder that it’s not going to be winter forever.”

On the cup James designed, spring flowers and delicate sprigs of greenery surround the Starbucks logo.

James is excited to see her cup design in her Starbucks store and she plans to put a few away for her daughter – in a treasure box for the time being because the 10-month-old would just chew on them now. And one day, James will tell her little girl about how she “stepped out of her comfort zone” to create a design that won a nationwide contest.

“My husband was very encouraging, and my takeaway from this experience is to make sure that I’m as supportive of my daughter and the things that she wants to try when she gets older.” 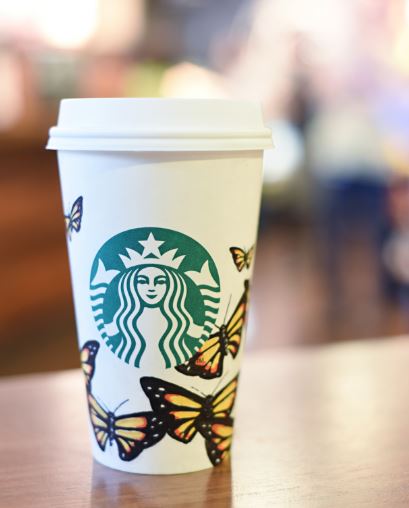 Holding a white Starbucks cup with its green Siren logo in the center, Brandon Fragua didn’t have much doubt about what he’d draw.

“Butterfly” was the Native American name given to his grandmother on her wedding day when she married Brandon’s grandfather, a member of the Jemez Pueblo Tribe. A symbol of transformation, his grandfather had a butterfly tattoo and Fragua has a similar one on his forearm. Inspired by its meaning, Fragua drew monarch butterflies around the cup, fluttering from the bottom to the top.

The recognizable orange and black wing pattern of the monarch is “both simple and complex,” said Fragua. “It’s beautiful. I’m inspired by nature.”

After the Starbucks dress code changed allowing visible tattoos, Fragua began receiving compliments on his butterfly tattoo. He expects his customers will be thrilled to see the pattern on reusable cups when they become available. Fragua’s said his family is excited for him and they realize Grandfather Paul, who passed away a few years ago, would be proud.

“He was a big part of my life,” said Fragua. “I grew up close to my grandparents and felt lucky to have them be such a strong influence on my childhood. He would be proud of me today no matter what, but I know that he’d be more than happy with me that I designed a cup that was so personal for our family.”

For each partner-designed reusable cup purchased, $0.50 will be donated to the Starbucks Caring Unites Partners (CUP) Fund – a financial assistance program started by partners in 1998 to help each other in times of need. The fund acts as a safety net for partners by providing monetary help following family emergencies, natural disasters or unexpected expenses.

To date, the CUP Fund has provided about $16 million in grants to more than 15,000 partners.

Lisa Price, Rene Suruda, Dixie McCullough and Joan Moffat created the fund, not knowing it would impact thousands of partners.

“We started small. We initially started that as a test in the Pacific Northwest region, but it quickly grew,” said Lisa Price, Starbucks vice-president, Partner Resources. “The CUP Fund is about demonstrating respect, dignity, empathy, care and compassion for each of us as human beings.”