Salt Lake City, UT, 2016-Jul-26 — /EPR Retail News/ —Before the sun rises each morning, Alan Bangerter rolls out of bed, throws on his coveralls, pulls on his work gloves and heads to the fields with his family to harvest and pack. For over six generations the Bangerter family has sold fresh corn, radishes, zucchini and a variety of other fine vegetables to the people of Utah from their farm in Bountiful. Now, over 30 local Utah farmers, like the Bangerter’s, have teamed up with Associated Food Stores members Macey’s, Dan’s, Dick’s, Lin’s and Fresh Market to offer the freshest, locally grown produce throughout the state.

Each Saturday morning from 7 a.m. to noon through September 3, Macey’s, Dan’s, Dicks, Lin’s and Fresh Market stores will feature farmer’s markets, proudly displaying local produce on the porch of their store fronts.  Guests will have the opportunity to meet some of the local farmers and will be able to sample the beehive state’s best produce.

The Utah-grown fruits and vegetables will also be sold while supply is available inside the local grocery stores produce departments, clearly marked with the name, location of the farm and story of the grower—giving customers a glimpse of where their produce came from and more importantly, the local farms they’re supporting.

“Our guests can find a wide assortment of local produce—from watermelon to peaches, corn, zucchini—we have all the goodness,” said Danni Barnhart, produce merchandiser for Associated Retail Operations. “As a local grocery store, we find working with local farmers is a win-win for everyone. Our guests get the best produce available, local farmers are able to sell their crops—supplying our locally owned grocery stores, which ultimately strengthens Utah’s economy.”

Darin Worden, owner of Heirloom’s and More starts his day out like many other farmers. Lacing his boots on his porch while he watches the sun rise. Some days, he even works by the light of his headlamp to irrigate his fields. Worden’s farm specializes in unique produce items that are not typically commercially grown, like rainbow beets carrots, pink chiogga Italian beets, atomic red carrots, cosmic purple carrots and more.

“It’s challenging for small farms like ours to compete against large, traditional produce farms. I think the partnership we have with Associated Food Stores is amazing—I really take my hat off to them. These local grocery stores have placed orders with us that are not only helping us survive, but will one day help us to be even more successful,” said Worden. “It takes a lot of hard work to put a great local product on the table— a lot of our farming is actually done by hand—but it also provides a sense of satisfaction and accomplishment to see our customers enjoy fresh, healthy and delicious produce.”

More than 30 local growers’ produce will be featured at Macey’s, Dan’s, Dick’s Market, Lin’s and Fresh Market stores throughout the summer while supplies last. 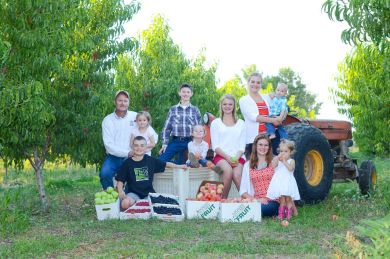