TOKYO, Japan, 2017-Apr-21 — /EPR Retail News/ — On April 19, the eve of the inauguration of Dior’s new boutique in the Ginza Six shopping center in Tokyo, the Maison held an exceptional live show in the Japanese capital featuring the first haute couture creations by Maria Grazia Chiuri and the Dior Homme Fall-Winter 2017 collection by Kris Van Assche.

In a labyrinth designed like a secret garden, Maria Grazia Chiuri, Creative Director of Dior women’s collections, presented her first haute couture creations for Spring-Summer 2017. Flowers, plants and allegorical images channel the imagination of Christian Dior, evoking the changing seasons and ornamenting evening dresses in a metamorphosis of powdery colors.  A feminine tuxedo is reborn in fresh interpretations and the celebrated Bar jacket is deconstructed and reinvented, even as a cape. Maria Grazia Chiuri unveiled entirely new creations, drawing inspiration from Monsieur Dior’s 1953 design of a Japanese garden dress. Fluid dresses hint at the curves beneath, with delicately embroidered flowers and bird motifs on jackets, coats and a hooded cape.

Inaugurated on April 20, the new Dior Ginza Six boutique covers five levels with a façade on the famous Chuo Dori shopping street, offering the complete range of Dior creations for women and men.

PARIS, 2016-Mar-29 — /EPR Retail News/ — Since its founding in Rome in 1884, Bulgari has always known how to surprise, innovate and reinvent itself. These high standards have contributed to its ascent in watchmaking, making Bulgari one of the few houses today with a Manufacture that allows control over the entire creative process, end to end. Here’s a close-up look at Bulgari’s high-precision production mechanism.

Divided among four sites located in Switzerland’s Jura region, the Bulgari Manufacture covers all the stages in the creation of the most outstanding contemporary watches. From horological mechanisms and casings to metal watchbands and high-end dials, all watch components are produced in-house. Some 350 employees meticulously execute the design and development processes, from the initial design sketch to final quality control. Several dozen métiers are represented, spanning both traditional expertise and state-of-the-art technologies.

At the Saignelégier facility, production focuses on casings and gold and steel bands for some of Bulgari’s most high-profile models. This unit brings together an array of highly-specialized métiers to ensure the various production stages, including numerical control milling machines that shape blocks of gold or steel, lubricated by oil sprays, and an imposing polishing chamber where all components are processed by hand, down to the smallest links in a watchband.

The Chaux-de-Fonds facility makes high-end dials, whose elaborate design requires a wealth of expertise, as well as extensive experience. Impeccable quality is imperative at each stage in the manufacturing process to ensure that the product complies with the highest standards of excellence.

Neuchâtel, Bulgari’s fourth production site, is the operational nerve center, where final assembly, mechanism casings and the ultimate quality controls are carried out. This is also where jewelry and watchmaking come together to finalize high jewelry watches designed in close cooperation with Bulgari Jewelry teams. For each piece, the precious components are crafted at one of two Bulgari facilities, either the Valenza Manufacture or the Haute Joaillerie workshop in Rome. Watches are made using a traditional technique called lost-wax casting. Specialized goldsmiths clean, assembly and finish all precious metal parts to give shape to bands and casings set with precious gems, following the natural movement of the wrist.

Bulgari’s watchmaking operations take advantage of natural synergies, making the Italian House a benchmark in terms of quality and precision in the demanding world of high-end watch manufacturers. 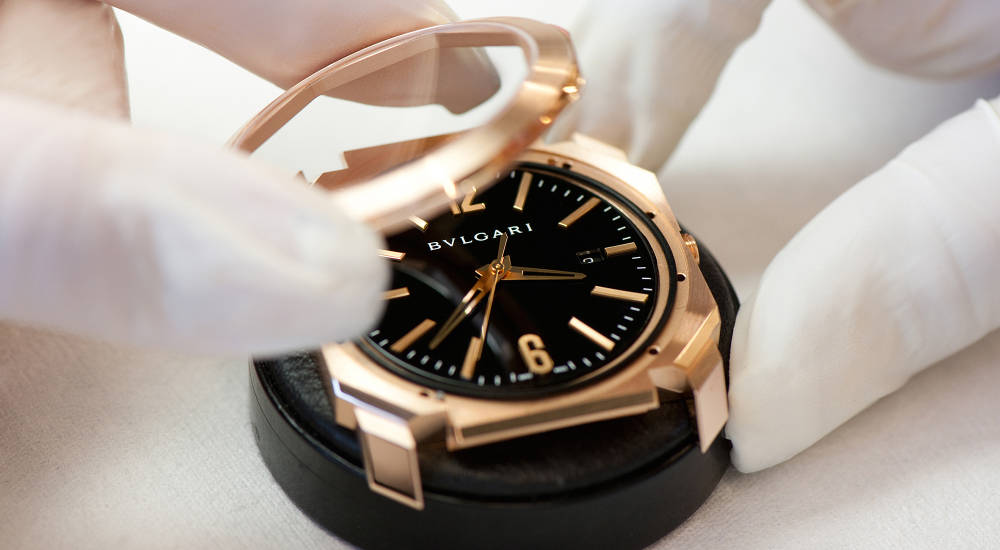