SEATTLE, 2016-Aug-01 — /EPR Retail News/ — Nordstrom (NYSE: JWN) announced plans to expand its partnership with Madewell by adding the brand to an additional 20 stores this fall. This is the third distribution expansion since the initial launch of the partnership in March 2015 and will result in the retailer carrying Madewell in a total of 76 locations in the U.S. and Canada, as well as Nordstrom.com. Outside of Madewell stores, Nordstrom is the only brick and mortar retailer to sell Madewell merchandise.

The fall collection will hit all stores on July 27. Featured styles include borrowed-from-the-boys button down plaid shirts and effortless embroidered dresses. Madewell denim essentials, such as the High Riser skinny jean, and the go-to Classic Jean Jacket, will also be a part of the fall delivery.

Nordstrom was the launch retail partner of choice for SJP Collection, Sarah Jessica Parker’s line of shoes, Topshop/Topman and IVY PARK. The retailer has also collaborated exclusively with Jason Wu for the launch of Miss Wu and Tank Magazine fashion director and street style star Caroline Issa for the ‘Nordstrom Signature’ and Caroline Issa collection, as well as with Olivia Palermo for Olivia Palermo + Chelsea28.

ABOUT NORDSTROM:
Nordstrom, Inc. is a leading fashion specialty retailer based in the U.S. Founded in 1901 as a shoe store in Seattle, today Nordstrom operates 329 stores in 39 states, including 121 full-line stores in the United States, Canada and Puerto Rico; 200 Nordstrom Rack stores; two Jeffrey boutiques; and one clearance store. Additionally, customers are served online through Nordstrom.com, Nordstromrack.com and HauteLook. The company also owns Trunk Club, a personalized clothing service serving customers online at TrunkClub.com and its five clubhouses. Nordstrom, Inc.’s common stock is publicly traded on the NYSEunder the symbol JWN.

ABOUT MADEWELL:
The first Madewell store opened in 2006 with designs inspired by its workwear beginnings modernized for today. Denim is at the core of everything we do – from great jeans to all the things you wear with them: tees, ankle boots, leather jackets, and more. Madewell is effortless, sexy, cool, tomboy, artful and unexpected. For more information, visit www.madewell.com and follow us @Madewell1937. 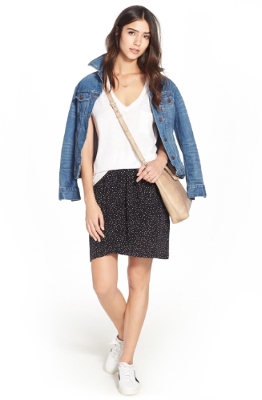