“On behalf of SM, I would like to express gratitude to our valued partners and loyal customers. Without your continued support, SM will not thrive in China, among the world’s largest retail markets. We maintain to drive retail service as our main backbone, with an aim to create an environment people can call their second home,” SM Prime’s mall group, SM Supermalls Senior Vice President Steven Tan said.

This is the sixth time since 2011that SM Prime has been recognized by Mall China.

Mr. Tan, for his part, received the 2015 International Professional Leader Award for his insight into retail, commercial real estate and shopping center industry in China and promoting and giving significance guidance on development strategy.

SM opened its first mall in China, SM City Xiamen in 2001 with a gross floor area (GFA) of 128,203 square meters. In 2009, the upscale SM Lifestyle Center in Xiamen was opened with a GFA of 109,922 sqm. In 2013, the SM Skywalk was launched, linking SM Xiamen and SM Lifestyle Center, providing more convenience to customers.In the last two years, SM Xiamen and SM Lifestyle Center offered WiFI services, increased parking lots, added facilities for persons with special needs and a nursery room for mothers, installed LED facilities and installed an intelligent parking system all aimed at a better customer experience. Aside from these, SM also upgraded the brands inside the mall.

Established in 2002, Mall China is the first non-profit organization in Mainland China catering to China’s retail property sector. It is likewise the largest shopping center retail organization in China. It has 700 corporate members of investors, developers, operators, retailers and relevant service agencies.

Mall China established the Golden Mall Awards to promote the best malls and encourage enterprises which have made outstanding contributions to the development of the shopping mall industry. Golden Mall Awards recognize and evaluate recent opening or under-construction projects.

About SM Prime in China
SM Group was founded by Mr. Henry Sy, Sr. Since entering the Chinese market, the SM Group through SM Prime Holdings Inc. (SM Prime) has set up shopping centers in Xiamen, Jinjiang, Chengdu, Suzhou, and Chongqing. Another mall, SM City Zibo, which spans 150,600 sqm, is set to open in 2015. These malls have demonstrated the goal and impact of the SM Group’s strategy to build “new centers of urban life” and have improved local business facilities and quality of life. 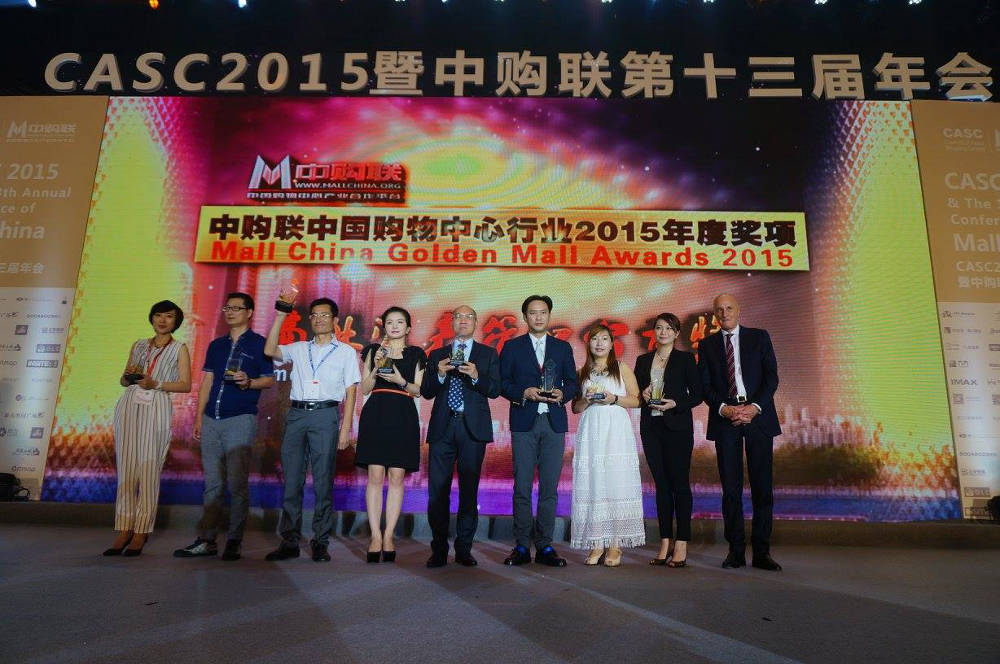 SM Supermalls Senior Vice President (fourth from right) Steven Tan receives the Mall China Golden Mall Award on behalf of SM. With Mr. Tan are the other winners and the presenter (first from right) Michael Lloyd, Chairman of The TOMLIK Group.