SEATTLE, 2016-Jan-18 — /EPR Retail News/ — Among the Starbucks partners (employees) fanning out to volunteer for community service projects on Martin Luther King Jr. Day, Spencer Bowen is likely the only one who has been rewarded for past good deeds with a series of ceremonial sheep dinners.

Bowen, a two-year partner involved in research and development at Starbucks Seattle headquarters, spent a period in Kyrgyzstan serving as a humanitarian assistance program manager for the United States Air Force. Arriving in the fall of 2011, he worked with the Kyrgyz ministers of education and health, as well as U.S. Embassy and Peace Corps figures, but also got a taste of day-to-day life in the landlocked Central Asian nation.

During his seven-month deployment, he hired and oversaw local contractors renovating schools and medical clinics, directed an effort to replace English schoolbooks dating from the 1950s with new texts, and led a program that distributed 12,000 blankets to dozens of far-flung locations.

The latter effort, embarked upon as winter approached, put him in contact with village leaders across the mountainous landscape.

“We had coats to provide for their children and they were so grateful,” Bowen said. “They didn’t have money and we didn’t want anything in the first place, but they felt compelled to give us something. So every village we went to we had a sheep dinner.”

Stepping Up at Fisher House

On MLK Day, Bowen will lead a group of Starbucks volunteers at the VA Puget Sound Fisher House. The facility is one of 67 around the United Stated, United Kingdom and Germany providing a place where military and veterans’ families can stay at no cost while a loved one is receiving treatment. Bowen’s crew of 10 adults and a handful of children will make greeting cards for veterans and family members and prepare meals for 30 to 40 residents of the facility.

“The families who go to Fisher House are geographically separated from their homes and they don’t necessarily have access to groceries,” said Bowen. “A home-cooked meal is a treat for them, because otherwise they have fast food or hospital food.”

Bowen, who is involved in community service projects throughout the year as a member of the Starbucks Armed Forces Network, wanted to work with Fisher House from the moment he heard about the opportunity.

“This is exactly the kind of thing we want to be doing, and not just for a one-time kind of impact,” he said.

A Nationwide Day of Service

Fisher House is one of a half-dozen locations in the Seattle area where Starbucks volunteers will be congregating on MLK Day. At several locations, partners will be joined by students from the University of Washington as part of a three-year partnership with the United Way that encourages partners and students to make January 18 a day of service. An estimated 500 UW students participated in service work last year.

Starbucks partners will be involved in hundreds of projects around the nation on MLK Day – from boarding up vacant houses near two Detroit schools and beautifying schools in major cities to serving coffee and guiding visitors through the National Civil Rights Museum in Memphis, Tennessee.

Partners and customers can find a service project in their community through this website. 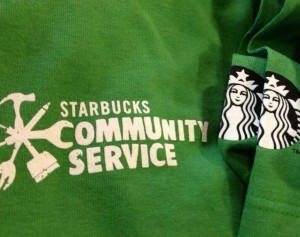