SEATTLE, 2015-1-23 — /EPR Retail News/ — The manager of a Baltimore Starbucks struggled to find the right candidates for barista and shift manager jobs in her Southside Marketplace store.

“It can be hard to find someone who has that right mix of experience and passion,” said Erica Wertlieb. “I’m looking for candidates who are motivated, professional and eager to serve their customers and their communities. It’s a lot tougher than you might think.”

Managers at other companies in Baltimore have noticed similar hiring challenges, even though the city has over 15,000 young people between the ages of 16 and 24 who neither in school nor employed. These young men and women often referred to as “opportunity youth” because with the right skills and training, they represent a huge, untapped opportunity for an infusion of productivity and creativity in the workforce. Across the U.S. the opportunity youth population is approaching 7 million.

Finding ways to engage these young people in education or employment is part of an initiative Starbucks launched and the U.S. Conference of Mayors (USCM) called Solutions City℠. Over the course of one year, mayors in Baltimore, Columbus, Orlando, Phoenix and Sacramento meet with community leaders and residents at their local Starbucks® store to identify solutions to the challenges facing young people, including disconnected youth and veterans.

“Solutions City is about bringing stakeholders to the table, with their mayor, to have open, honest discussions over coffee, much like the conversations we’re already seeing in our stores each day,” said Blair Taylor, Starbucks chief community officer. “Since launching these town hall meetings last June, we’ve heard from hundreds of community leaders and young people about the need to change how employers and communities view opportunity youth. In many ways, our nation’s future rests upon our collective ability to connect these young men and women to jobs and opportunities that will help unlock their full potential.”

One such young person is Kendra, a Starbucks partner (employee), who recently completed a summer jobs program in Baltimore through YouthWorks. The city program connects unemployed 16-24 year olds from disadvantaged backgrounds with five- to six-week work experiences in local businesses, nonprofits, and city and state government agencies.

“YouthWorks heard I was looking to fill some open positions and called to eagerly tell me about Kendra,” recalled Wertlieb. “I had previously heard our mayor speak about this program at the first Solutions City town hall at my store, and knew I had to give it a shot. I interviewed Kendra over the phone and then again in person and was completely blown away. Frankly, I’d never had an interview go more smoothly.”

“I remember feeling completely at ease when I met Erica,” said Kendra who applied to be a Starbucks barista. “She asked some pretty tough questions, but I felt prepared to answer them. I don’t think I would have felt as confident if I hadn’t had the summer training with YouthWorks. The biggest challenge for young people like me is simply getting that first interview.”

Wertlieb hired Kendra, and said she was pleasantly surprised to see how quickly Kendra assimilated with the team at her store.

“She came in with a big smile on her first day and quickly proved she had what it takes to be a partner at our company. She truly opened up my eyes to the importance of building a team that represents our community,” said Wertlieb. “Each partner brings a different perspective to the table.”

Kendra now takes online business classes, while working at Starbucks, and would like to develop her own cosmetics line someday.

“Success stories like this show the lasting effect that a productive summer job can have on a young person,” said City of Baltimore Mayor Stephanie Rawlings-Blake. “These types of opportunities are such a great way to introduce young people to the workplace and help employers see the full potential these candidates can bring to their teams.”

The USCM Winter Meeting is being held from January 20-23. On Friday, Starbucks Blair Taylor will share insights and updates on several Solutions City projects:

In Sacramento, Mayor Kevin Johnson is building a coalition of employers and employment agencies to commit to hiring more than 100 (and counting) young people and veterans and ensure there are receiving the skills training they need to excel in the workplace.

In Columbus, Mayor Michael Coleman has brought together a diverse group of stakeholders to solve youth unemployment in the city. Partnerships like those between Starbucks, SK Foods (a Starbucks food supplier), and LeadersUp, which connects employers with skilled opportunity youth, are already proving to be a viable model for other employers in the community.

In Baltimore, Mayor Stephanie Rawlings-Blake is leveraging the city’s Hire One Youth and YouthWorks initiatives to bring together local employers and workforce training programs to find synergies as they work towards a common goal.

In Phoenix, Mayor Greg Stanton is bringing local leaders together with the city’s education system and nonprofits to begin discussion opportunities for a re-engagement center that will serve disconnected young people in the community.

In Orlando, Starbucks will work with Mayor Buddy Dyer to kick off a series of town halls beginning February 2015 aimed at supporting STEM after-school programs for young people in the community.

“As a company, we are deeply concerned about the growing number of disconnected or disengaged young people in our country,” said Taylor. “We fundamentally believe we need to work with our country’s mayors and other community leaders to come together and help create pathways to opportunity in education and employment.” 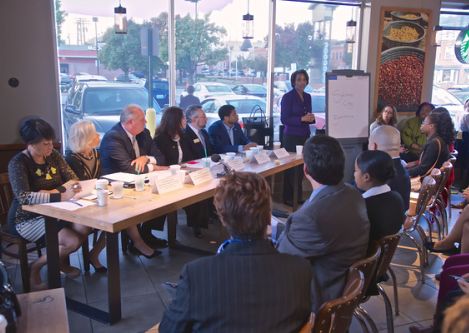