MetaProp NYC Co-Founder Aaron Block remarked, “ICSC is a powerhouse in the real estate industry and their organization brings an important perspective to our all star lineup of partners, mentors and start-ups.  Retail real estate offers one of the biggest opportunities in today’s property technology industry.”

The MetaProp NYC accelerator annually selects eight of the best technology-driven real estate start-ups to participate in its 16-week program that is based in New York City.  The accelerator will invest $4 million to $5 million over the next five years in approximately 40-50 startups.  Early stage startups receive at least $25,000 in cash, access to a vast mentor network and access to Class A office space for 16 weeks, in exchange for six percent of common stock. In addition, later stage startup participants receive up to $250,000 in funding.

ICSC’s newly inked agreement with MetaProp NYC brings an expansive network of industry contacts and resources to the table. The world’s largest association for the retail real estate industry has more than 70,000 members in over 100 countries, and will serve as a tremendous resource for the eight companies.

“We are excited to partner with MetaProp NYC and to support industry innovation through these young startups,” said Michael P. Kercheval, ICSC’s president and CEO. “Technology is having a major moment in the retail real estate industry and is influencing every sector, from how consumers shop to how retailers are reaching these consumers.”

The first selections in the accelerator’s inaugural program include:

MetaProp NYC Co-Founder Clelia Peters remarked, “We will continue to select up to five more companies from a pool of 150 office, retail, residential, storage, hospitality and leisure real estate technology applications received during our two-month admissions period.  That said, we have been extremely selective so far and these startups set a high bar for the rest of the class. Not only are they successfully solving some of real estate’s most pressing problems, they also have the support of other influential investors and accelerator programs like TechStars, Plug & Play and the NYU Polytechnic incubator.”

About MetaProp NYC
MetaProp NYC is a NYC-based real estate tech accelerator that brings together the brightest minds in real estate and technology to help quickly build the industry’s most promising young companies. Each year, the eight best technology-driven real estate industry startups are selected to participate in the 16-week intensive growth program based in New York City. The program culminates in a Demo Day to partners, investors, VCs and media.

About ICSC
Founded in 1957, ICSC is the premier global trade association of the shopping center industry. Its more than 70,000 members in over 100 countries include shopping center owners, developers, managers, marketing specialists, investors, retailers and brokers, as well as academics and public officials. For more information, visit www.icsc.org or www.TheCenterofShopping.com. 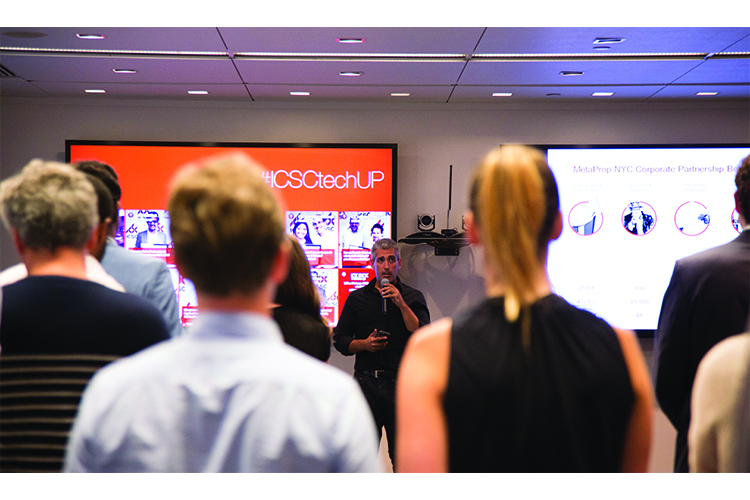