CHESHUNT, England, 2015-12-8 — /EPR Retail News/ — People across the UK are set to enjoy an extra Happie Christmas this year,  as Tesco delivers free mince pies to towns around Britain. To help customers get into the festive spirit, the retailer is delivering thousands of the little festive treats, free, to people’s front doors over the next few weeks.

Local residents in towns and cities including Portsmouth, Aylesbury, Newmarket, Nottingham and London will be surprised and delighted with a knock on the door as the Mince Pie Man looks to drop off 1,000 packs of mince pies ranging from Tesco Finest to Free From, and wishing them all a Merry Christmas.

And if you’re not home when he calls for you, don’t fear: there’s still plenty of opportunity to grab your own pack of Tesco Mince Pies. Customers will also be able to get their hands on a free pack by tweeting #HappieChristmas if they see the van in their local area.

“I’m really excited about the Mince Pie Run; it’s definitely a good way to get people in the festive mood.

“I’ll be gently knocking on people’s doors and handing out free packs of Tesco Mince Pies and saying hello.  But, if I don’t see you, make sure you see me, tweet a picture of my van, and then there’ll be a pack of mince pies winging their way to you faster than Father Christmas’ very own reindeer-drawn sleigh.”

If the Tesco Mince Pie Man doesn’t see you but you see him, make sure you take a photo of his van and tweet #HappieChristmas to @tescomedia.

For people who are not at home when we call at their door, we’ll post cards through their letterboxes saying ‘sorry we missed you’, along with a voucher to be redeemed in store. 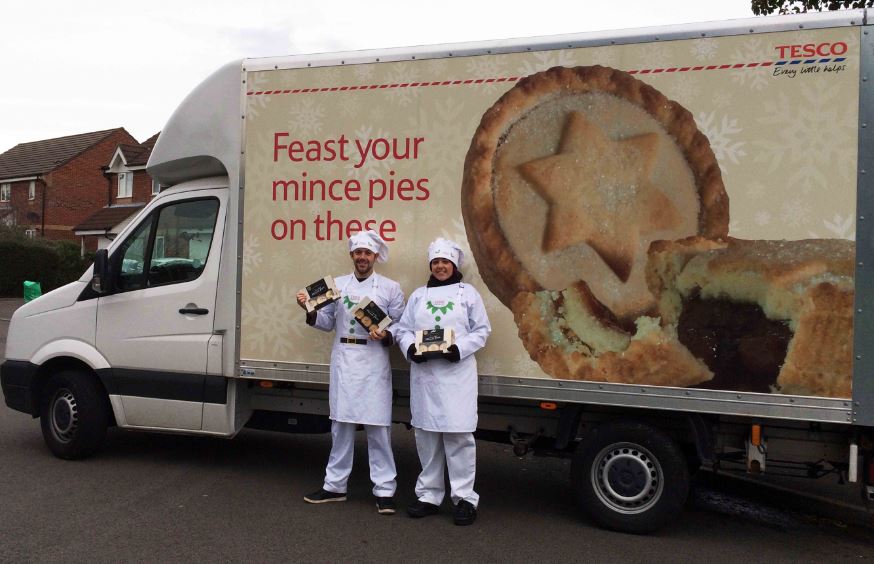 Above: The Mince Pie Van with colleagues Paul Harrisson and Vanessa Collier