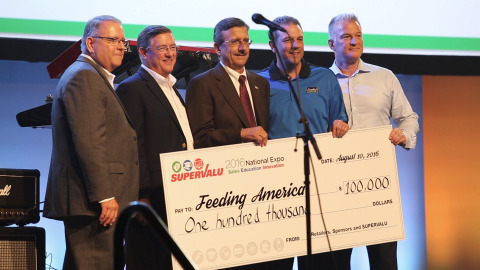 SUPERVALU donates $100,000 to Feeding America to support its mission to end hunger

EDEN PRAIRIE, Minn, 2016-Aug-16 — /EPR Retail News/ — Representatives for Feeding America were on hand last evening at SUPERVALU’s 2016 National Expo to accept a $100,000 donation in support of the organization’s mission to end hunger. The donation was made possible through the collective efforts of SUPERVALU, and the independent grocery retailers and consumer packaged goods companies attending and exhibiting at this year’s Expo.

“All of the grocery retailers and companies involved in this effort know how important it is to give back to their communities,” said Mike Stigers, SUPERVALU Executive Vice President, Wholesale. “With this in mind, we thought the Expo provided the perfect opportunity to join together for the first time to make a difference for hunger relief in the communities where we live and work.”

The donation was presented to Bob Chatmas, chief operating officer of Second Harvest Heartland, a Minneapolis-St. Paul Feeding America member food bank, prior to a Wednesday night celebration featuring a performance by singer, songwriter and platinum record producer Andy Grammer, who has partnered with Feeding America to raise awareness for hunger relief as a member of its Entertainment Council.

“One in seven Americans struggles to get enough food to eat,” said Audette, who is also a Second Harvest Heartland board member. “This donation will make a tangible impact by providing food for those in need. For every $1 received, Feeding America is able to help provide 11 meals to people facing hunger. We are so grateful to the collective efforts of SUPERVALU and all of the independent grocery retailers and companies at the National Expo who helped to make this donation possible.”

Feeding America is the nation’s leading hunger relief organization with 200 member food banks serving all 50 states, the District of Columbia and Puerto Rico. Together, they provide food to more than 46 million people through 60,000 food pantries and meal programs in communities across America.

About SUPERVALU INC.
SUPERVALU INC. (NYSE: SVU) is one of the largest grocery wholesalers and retailers in the U.S. with annual sales of approximately $18 billion. SUPERVALU serves customers across the United States through a network of 3,342 stores composed of 1,773 stores operated by wholesale customers serviced primarily by the company’s food distribution business; 1,368 Save-A-Lot stores, of which 896 are operated by licensee owners; and 201 traditional retail grocery stores (store counts as of June 18, 2016). Headquartered in Minnesota, SUPERVALU has approximately 40,000 employees. For more information about SUPERVALU, visit www.supervalu.com

About Feeding America:
Feeding America is the nationwide network of 200 food banks that leads the fight against hunger in the United States. Together, we provide food to more than 46 million people through 60,000 food pantries and meal programs in communities across America. Feeding America also supports programs that improve food security among the people we serve; educates the public about the problem of hunger; and advocates for legislation that protects people from going hungry. Individuals, charities, businesses and government all have a role in ending hunger. Donate. Volunteer. Advocate. Educate. Together we can solve hunger. Visit www.feedingamerica.org, find us on Facebook or follow us on Twitter.