Massimo Dutti is to open a new for&from store in Igualada, Barcelona, in collaboration with the non-profit organization Moltacte. The store will generate 15 employees, 10 of whom will have some kind of mental disorder. The opening of this new store is part of Inditex’s programme to promote the integration into society and employment of people with physical or mental disabilities. The programme already has a network of 10 stores in seven cities.

Massimo Dutti for&from Igualada sells products from previous seasons at reduced prices as a special franchise. Workers diagnosed with conditions receive ongoing training and psychological and professional support both from technicians working for Moltacte and its local partner, Taller Auria, which specialize in the development of social and employment rehabilitation programmes for people with mental disorders, and from Massimo Dutti sales teams.

The new Massimo Dutti for&from store will be located in the “Ca la Mamita” (Carrer de Custiol 9), one of the buildings with most historical and artistic value in Igualada. Built in 1905 by the modernist architect Isidre Gili i Moncunil, the building is notable for its round tower, the central feature of its facade, and the decorative floral motifs and forged iron balconies so typical of Catalan modernist style. Aware of the importance of this building, Massimo Dutti’s architectural team has carried out renovation work that respects and enhances its artistic value.

New project in Ferrol (A Coruña)
Inditex’s for&from programme began in Palafolls, Barcelona, in 2002 and currently generates 85 jobs for people with some kind of physical or mental disability in the 10 stores run by the project for different brands within the Group. During the second six months of this year, Pull&Bear will open a new store as part of this programme in Ferrol (A Coruña).

All of these stores are being managed by social organizations specializing in the integration of people with disabilities, such as Moltacte, Fundació Molí d’en Puigvert, the Galician Confederation of People with Disabilities (Confederación Galega de Persoas con Discapacidade, COGAMI) and the Alicante Association for People with Mental Disabilities (Asociación pro discapacitados psíquicos de Alicante, APSA).

Since its creation, the for&from programme has not only demonstrated its capacity to improve the quality of life of people with disabilities but also provides an important source of funding for collaborating social organizations. Once Inditex has made the initial donation to fund the construction of the store, the model becomes self-sustaining for the social organizations involved based on product sales. The for&from network of stores currently boasts annual sales of more than €5.3 million.

Moltacte
Moltacte is a non profit entity that was created in 2006 with the mission of achieving the integration into society and employment of people with mental disorders. To this end, it creates outlet stores that allow consumers to not only find fashion clothing and accessories at reduced prices but also contribute to a socially sustainable project that generates real, stable, quality employment for people with mental disorders.

This Massimo Dutti store in Igualada is the third commercial project involving Moltacte and Inditex. Their collaboration began in 2012 with the inauguration of a similar store for Stradivarius in Manresa, Barcelona, and another project for Massimo Dutti in Llagostera, Girona, in 2014. 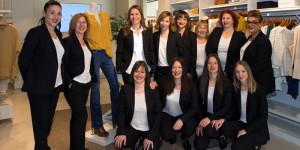