Ms. Elfers stated, “We are honored to celebrate our 20th anniversary with Nasdaq. We are proud of our relationship with Nasdaq and proud of the significant value that we have created for our shareholders.”

About The Children’s Place, Inc.
The Children’s Place is the largest pure-play children’s specialty apparel retailer in North America.  The Company designs, contracts to manufacture, sells at retail and wholesale, and licenses to sell fashionable, high-quality merchandise at value prices, primarily under the proprietary “The Children’s Place,” “Place” and “Baby Place” brand names.  As of July 29, 2017, the Company operated 1,026 stores in the United States, Canada and Puerto Rico, an online store at www.childrensplace.com, and had 161 international points of distribution open and operated by its 7 franchise partners in 19 countries.

This press release contains, and the above referenced conference call may contain, forward-looking statements made pursuant to the safe harbor provisions of the Private Securities Litigation Reform Act of 1995, including but not limited to statements relating to the Company’s strategic initiatives and adjusted net income per diluted share.  Forward-looking statements typically are identified by use of terms such as “may,” “will,” “should,” “plan,” “project,” “expect,” “anticipate,” “estimate” and similar words, although some forward-looking statements are expressed differently.  These forward-looking statements are based upon the Company’s current expectations and assumptions and are subject to various risks and uncertainties that could cause actual results and performance to differ materially. Some of these risks and uncertainties are described in the Company’s filings with the Securities and Exchange Commission, including in the “Risk Factors” section of its Annual Report on Form 10-K for the fiscal year ended January 28, 2017. Included among the risks and uncertainties that could cause actual results and performance to differ materially are the risk that the Company will be unsuccessful in gauging fashion trends and changing consumer preferences, the risks resulting from the highly competitive nature of the Company’s business and its dependence on consumer spending patterns, which may be affected by weakness in the economy that continues to affect the Company’s target customer, the risk that the Company’s strategic initiatives to increase sales and margin are delayed or do not result in anticipated improvements, the risk of delays, interruptions and disruptions in the Company’s global supply chain, including resulting from foreign sources of supply in less developed countries or more politically unstable countries, the risk that the cost of raw materials or energy prices will increase beyond current expectations or that the Company is unable to offset cost increases through value engineering or price increases, and the uncertainty of weather patterns. Readers are cautioned not to place undue reliance on these forward-looking statements, which speak only as of the date they were made.  The Company undertakes no obligation to release publicly any revisions to these forward-looking statements that may be made to reflect events or circumstances after the date hereof or to reflect the occurrence of unanticipated events.

Red Nose Day, which is happening today in the U.S., is a chance for everyone to get seriously silly to raise funds and help change the lives of kids who need it most – in the U.S. and around the world. Over the past several weeks and continuing through next week, Walgreens has asked its customers to purchase red noses and other red flair items and wear them today on Red Nose Day, with proceeds benefiting the Red Nose Day Fund.

In honor of the day, Walgreens Corporate Operations Vice President Skip Bourdo and Christy Gibb of the Comic Relief Board of Trustees rang the Opening Bell. Representatives from Red Nose Day 2016 partners NBCUniversal and Mars Chocolate North America also were in attendance.

“We’ve already raised millions of dollars for this year’s event, thanks to our valued customers, supplier partners and particularly our passionate team members who all took advantage of a chance to get seriously silly during this powerful campaign,” said Bourdo.

This year’s Red Nose Day campaign will culminate tonight in a live, two-hour broadcast on NBC from 9-11 p.m. Eastern time. The television special will feature popular comedians, top musicians and Hollywood stars in an engaging mix of comedy, live musical performances and short, compelling films shedding light on the cause. Through the power of entertainment, Red Nose Day raises awareness and money to help kids who need it most at home and around the world. Red Nose Day, in its second year in the U.S., has raised over $1 billion globally in the last 25 years.

The company was created through the combination of Walgreens and Alliance Boots in December 2014, bringing together two leading companies with iconic brands, complementary geographic footprints, shared values and a heritage of trusted health care services through pharmaceutical wholesaling and community pharmacy care, dating back more than 100 years.

The company’s portfolio of retail and business brands includes Walgreens, Duane Reade, Boots and Alliance Healthcare, as well as increasingly global health and beauty product brands, such as No7, Botanics, Liz Earle and Soap & Glory.

* As at 31 August 2015 (without subsequent adjustment for business acquisitions or dispositions), including equity method investments

** For 12 months ended 31 August 2015 (without subsequent adjustment for business acquisitions or dispositions), including equity method investments

About Red Nose Day
Red Nose Day (rednoseday.org) is a fundraising campaign run by the non-profit organization Comic Relief Inc. (comicrelief.org), a registered 501(c)(3) public charity. Red Nose Day has raised over $1 billion globally in the last 25 years, and in the UK has become a cultural phenomenon where people across the country come together to have fun, raise money and change lives. Red Nose Day launched in the U.S. in 2015, dedicated to raising money to help children who are most in need, both in the U.S. and in some of the poorest communities in the world. Last year it benefited children and young people in all 50 states and in 15 countries internationally.

Red Nose Day returns this year on 26 May 2016. The day’s events will culminate in a two-hour live primetime TV special on NBC, featuring the biggest stars across comedy, music, TV and film. Funds raised go to the Red Nose Day Fund which distributes the money through programs to keep children and young people safe, healthy and educated. Comic Relief Inc. in the US and Comic Relief UK are independent sister organizations that are joined by their shared vision of a just world, free from poverty and the mission to drive positive change through the power of entertainment.

*** Until June 4, 2016, for each Red Nose purchased Walgreens will donate $0.50; and for each Red Nose Flair item purchased (Beads, Bow Ties, Headbands, Sunglasses, Pens, Mugs, Cups and Hats) Walgreens will donate 10 percent of the purchase price to Comic Relief Inc.’s Red Nose Day Fund, which helps lift children out of poverty in the U.S. and overseas. For more information about the Red Nose Day Fund, visit rednoseday.org. No portion of purchase is tax deductible. 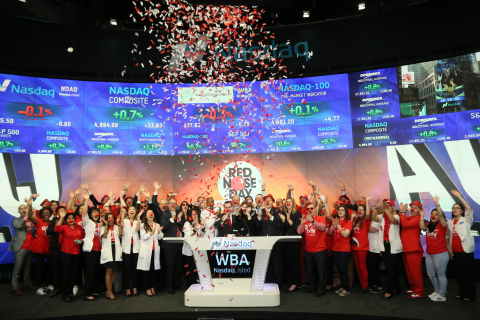