LONDON, 2015-3-9 — /EPR Retail News/ — As National Apprenticeship Week begins, Starbucks UK is announcing the 1000th graduate of its apprenticeship programme that recruits, trains and retains young talent for the business.

Almost half of Starbucks partners are under the age of 24, an age group facing the most significant challenges around employment. Starbucks Apprenticeships, launched in the UK in the Spring of 2012, offer young people an opportunity to learn about a retail management career and to build the transferable skills needed to further their individual goals.

“We are proud of our apprenticeship programme, the first of its kind for Starbucks globally,” said Lisa Robbins, director of Partner Resources for Starbucks UK. “With 21 graduated apprentices now store managers, and 57 shift supervisors, it proves to us that apprenticeships for young people are a genuine alternative to academic study and are a real path to a retail career. We are passionate about the true potential for apprenticeships and want to bust the myth that a vocational route is not as credible as pursuing higher education.”

Robbins said the Starbucks team is “delighted to reach its two-year apprenticeship commitment, but they won’t be slowing down.” Starbucks UK plans to offer up to 450 Level 2 apprenticeships this year. Level 2 is a 12-month program that trains apprentices in artisan and customer service skills. In addition, 80 Level 3 apprenticeships will be offered. Level 3 is an advanced apprenticeship in leadership and management.

“I thought I wanted to go to university but it’s very expensive. A friend of mine was doing an apprenticeship at Starbucks and so I looked into it,” said Koey Huckerby, a Starbucks apprentice at Westfield.  “The prospect of working, gaining experience, and getting paid the same as other baristas while achieving a qualification really appealed to me.”

As part of National Apprenticeship Week, running from March 9th – 15th, Starbucks UK will be offering buy one, get one free on all handcrafted drinks for apprentices with NUS apprentice extra cards.

For more information on this news release, contact Clare Salter. 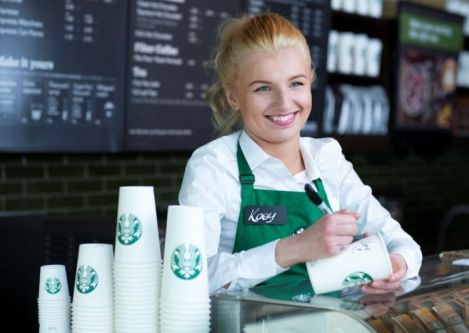 Starbucks UK announces the 1000th graduate of its apprenticeship programme