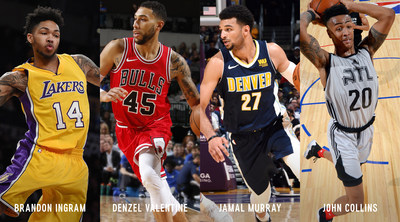 Express will tip-off the partnership with a series of lifestyle videos, which will reveal the brand ambassadors’ performance, style, determination and the will to win both on and off the court. The campaign will capture the essence of each athlete, what drives him to succeed and how fashion gives him the confidence to take on what’s next in his day and life—whether that’s suiting up in an Express Performance Suit for game day or relaxing in jeans on days off.

The partnership builds on Express’ history of collaborating with inspiring individuals and follows the retailers’ partnerships with professional athletes who were on the cusp of becoming champions in their sport.

“We’re proud to offer performance-driven fashion for self-starters going after what they want,” said David Kornberg, Express President and CEO. “We couldn’t think of better partners in this mission than the NBA and its young up-and-coming players. We’re thrilled to bring our customers closer to the game and to share the authentic stories of hard work, grit and perseverance through the lens of our NBA Game Changers Brandon, Denzel, Jamal and John.”

The integrated marketing and advertising campaign will premiere across Express’ digital, social media, and in-store platforms as well as the NBA’s digital and social media platforms beginning October 2017. In February, Express will also serve as an associate partner of the NBA Rising Stars Challenge during NBA All-Star 2018 in Los Angeles, California. For more information, visit www.express.com/NBAGameChangers.

About Express, Inc.
Express is a specialty apparel and accessories retailer of women’s and men’s merchandise, targeting the 20 to 30-year-old customer. Express has more than 35 years of experience offering a distinct combination of fashion and quality for multiple lifestyle occasions at an attractive value addressing fashion needs across work, casual, jeanswear, and going-out occasions. The Company currently operates more than 600 retail and factory outlet stores, located primarily in high-traffic shopping malls, lifestyle centers, and street locations across the United States and Puerto Rico. Express merchandise is also available at franchise locations and online in Latin America. Express also markets and sells its products through its e-commerce website, www.express.com, as well as on its mobile app.

IRVINE, Calif., 2017-May-23 — /EPR Retail News/ — No matter which team you’re rooting for in this year’s National Basketball Association (NBA) Finals, everyone can agree, team Taco Bell is a team every fan can support. For the second consecutive year, Taco Bell is teaming up with the NBA for the “Steal a Game, Steal a Taco” promotion. That means the first team to steal a win on the road during the 2017 NBA Finals also wins a free Doritos® Locos Taco for everyone in America. Whether you have a stake in the game, your team didn’t make it to the Finals or you don’t even typically watch basketball, everyone can cheer for free tacos and team Taco Bell.

“Crunch time during the NBA Finals has a whole new meaning when a stolen win on the road means everyone in America can again win a free Doritos® Locos Taco from Taco Bell,” said Marisa Thalberg, Chief Marketing Officer, Taco Bell Corp. “Regardless of which team ultimately wins the championship, we love that the real winners will be taco fans everywhere.”

“We are thrilled to once again partner with Taco Bell during this year’s NBA Finals,” said Kerry Tatlock, Senior Vice President, Global Partnerships, NBA. “The Finals are an exhilarating experience. Having fans root for the competing teams as well as for a chance to win a free taco brings even more excitement.”

The 2017 “Steal a Game, Steal a Taco” campaign follows the brand’s highly successful NBA partnership for the 2016 Finals, in which the Golden State Warriors won Game 4 against the Cleveland Cavaliers while on the road in Cleveland, winning free tacos for America. Taco Bell has historically also partnered with Major League Baseball (MLB) for the brand’s “Steal a Base, Steal a Taco” campaigns in the 2007, 2008, 2012, 2015 and 2016 World Series.

Program Rules
Program rules can be found at www.TacoBell.com/StealATaco

Taco Bell Corp., a subsidiary of Yum! Brands, Inc. (NYSE: YUM), is the nation’s leading Mexican-inspired quick service restaurant (QSR) brand. From breakfast to late night, Taco Bell serves made-to-order and customizable tacos and burritos, among other craveable choices, and is the first QSR restaurant to offer American Vegetarian Association (AVA)-certified menu items. Taco Bell and its more than 350 franchise organizations proudly serve over 42 million customers each week through 7,000 restaurants across the nation, as well as through its mobile, desktop and delivery ordering services. Overseas, Taco Bell has over 250 restaurants, with plans to add 2,000 more restaurants internationally within the next decade. The brand encourages its fans to “Live Mas” and connects with them through sports, gaming and new music via its Feed The Beat® music program. Taco Bell also provides education opportunities and serves the community through its nonprofit organization, the Taco Bell® Foundation™, and connects fans with their passions through programs such as the Live Mas Scholarship program. In 2016, Taco Bell was named as one of Fast Company’s Top 10 Most Innovative Companies in the World.Like: