New York Yankees Manager Joe Girardi to Keynote #NYnDM, which is marking its return Dec. 7 and 8 at the Jacob K. Javits Center.

NEW YORK, 2015-12-3 — /EPR Retail News/ — The International Council of Shopping Centers (ICSC) is gearing up for the annual New York National Deal Making Conference, which will be held Dec. 7 and 8 at the Jacob K. Javits Convention Center in New York. Thriving on the positive momentum of the retail real estate industry, this year’s conference is shaping up to be the biggest and best to date.

The 2015 program features new programming and distinguished speakers including New York Yankees Manager Joe Girardi as the keynote. Girardi is a baseball legend famous for guiding the New York Yankees to five playoffs and one World Series Championship. Girardi will deliver the keynote address at 12:30 p.m. on Monday, Dec. 7.

“With shopping center sales equaling 15% of U.S. GDP and the industry directly employing 1 out of every 11 Americans, it is an engine of our nation’s economy. Industry occupancy rates currently approximate 94%, illustrating its healthy condition,” said ICSC President and CEO Tom McGee. “With expected attendance of nearly 10,000 people, this conference, which serves as a medium to secure deals and foster relationships, speaks to continued optimism for that strength. This is good news given the integral role the industry plays in the social, economic and civic vibrancy of our communities across America.”

The two-day New York National Deal Making Conference will open with a preview networking event on Sunday, Dec. 6 at the ICSC Foundation “Bigger Better Party” in Times Square. The event will give attendees the opportunity to convene before the deals get going.

Don’t miss the opportunity to connect with owners, developers, brokers and premier retailers at the brand new Retailer Row on Tuesday. Participating retailers include Target, Starbucks, Century 21, Juice Press and Walgreens among others. Attendees are also invited to take advantage of the Pavilions: Finance, Global and the newly added P3, which promotes public-private partnerships and features neighborhoods and communities with development opportunities.

Unable to attend? Need a break from all the deals? Tune into ICSC LIVE! Filmed directly on the show floor, the C-Suite interview series will be available in real time across ICSC’s social channels and conference website. Produced in a late-night show format, attendees can experience the show as the studio audience while ICSC Spokesman Jesse Tron sits down with the industry’s most powerful players to discuss the current and future state of the industry, trends and more.

ICSC has a penchant for picking buzzworthy speakers – the 2014 keynote was Donald Trump. Also of note, last year’s program marked its first appearance at the Jacob K. Javits Convention Center, which resulted in an impressive 25% growth in attendance with more than 400 exhibiting companies and 9,600 attendees. ICSC forecasts even better results for the 2015 conference. 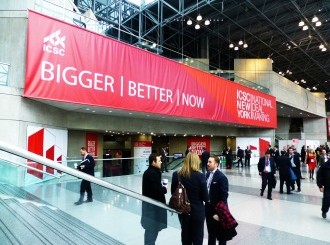