Paris, 2017-Jun-19 — /EPR Retail News/ — LVMH is pleased to announce that French designer Marine Serre of MARINE SERRE is the recipient of the LVMH Prize for Young Fashion Designers for 2017.

Rihanna, a world-famous music celebrity and fashion icon, honored LVMH by presenting the two trophies of the Prize, designed by Jean-Michel Othoniel, to the winners.

In recognition of the exceptional talent present in this year’s competition, the jury awarded a special prize to Kozaburo Akasaka of KOZABURO. He wins a 150,000 euro grant and a year-long mentorship program from the LVMH group.

“The jury was impressed by Marine Serre’s work, which cleverly combines urban, sportswear and oriental inspirations, creating through these confrontations a unique aesthetic. We have also awarded Kozaburo Akasaka of KOZABURO  a special prize. The Japanese designer distinguished himself with his delicately deconstructed menswear.

The fourth edition of the LVMH Prize saw over 1,200 young talents from 90 countries compete. This success is evidence of the international scope of the event. I’m proud that the LVMH Group has placed the spotlight on their work and supports their development” says Delphine Arnault.

In addition, three fashion graduates have been awarded the Graduate Prize. The recipients for 2017 are: Mariam Mazmishvili from La Cambre in Brussels,Maija Meiro from Aalto University in Helsinki, and Robert Wallace from Central Saint Martins in London.

They will each receive 10,000 euro and will join Louis Vuitton, Kenzo and Céline respectively for one year. Additionally, LVMH offers each of their universities a 10,000 euro grant in acknowledgement of their excellence.

Last year, British designer Grace Wales Bonner was the recipient of the LVMH Prize, while Canadian designer Vejas was awarded the special prize. 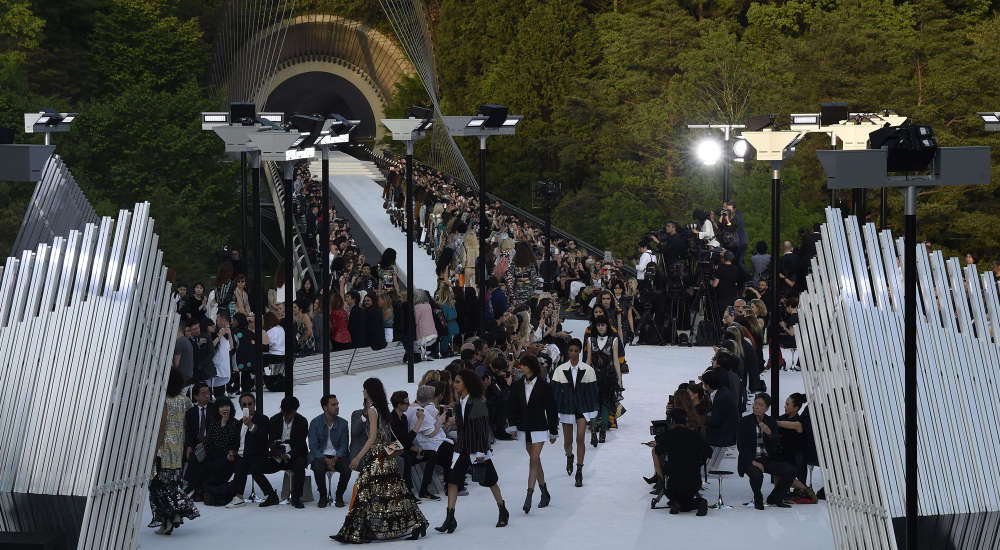 Paris, 2017-May-17 — /EPR Retail News/ — After Palm Springs in 2015 and Rio de Janeiro in 2016, Louis Vuitton this year headed to Kyoto in Japan to present its Cruise Collection. Expressing the spirit of travel and being on the road, the 2018 Cruise Collection designed by Nicolas Ghesquière, Louis Vuitton Creative Director for Women’s Collections, fuses fashion, nature and architecture.

To present a 2018 Cruise Collection, Louis Vuitton selected an extraordinary setting that bridges urban and nature, nestled in a hidden valley.  With a blend of exoticism and modernity, the Miho museum designed by architect I. M. Pei in 1997 in Shigaraki, to the southwest of Kyoto in a luscious surrounding forest, hosted a fashion show for the first time in its history.

Nicolas Ghesquière opened a new chapter for the Maison with a collection that pays tribute to designer Kansaï Yamamoto, who inspired an entire generation of Japanese designers to present their creations in France.

Modern and traditional…Western and Oriental…the clothes evoke the question of evolution. The pieces recall the samurai with figurative engraving, ceremonial dress, martial arts uniforms, the dramaturgy of Kurosawa films or the distinctive melancholy of Kitano’s movies.

Pantsuits and architectural tunics feature designs inspired by the paintings of Kokusai. Interwoven jersey and leather sweaters call to mind the armor of Japanese warriors. Japanese cultural references include evening dresses gleaming with Noh theater gold, while handbags and clutches are decorated with Kabuki masks.