BERLIN, 2015-11-12 — /EPR Retail News/ — Zalando SE, Europe’s leading online platform for fashion, has significantly grown market share in the third quarter and almost reached full year 2014 revenue levels after only nine months of 2015. On its guided growth trajectory, Zalando will reach close to EUR 3 billion in revenue for the full year 2015 and will have around 10,000 employees by year-end.

Group revenue in the third quarter 2015 grew by 42.2 per cent to EUR 713.1 million, adding more than EUR 200 million in incremental revenue compared to the prior year period (Q3 2014: EUR 501.4 million). Zalando’s focus on the customer remained the key driver of growth, with customer satisfaction hitting an all-time high in the third quarter. Zalando introduced additional brands to extend the depth of its product range and further improved customer convenience, for example through faster delivery and easier returns. The evolving mobile offering plus successful brand building campaigns also helped to increase customer engagement.

Rubin Ritter, co-CEO of Zalando, said: “Our accelerated growth is driven by very strong customer metrics, so we are clearly making the right investments. We are confident that we will deliver a unique combination of fast growth and clear profitability for the full year, which is also the right path for us going forward.”

Continued tech hiring and associated platform initiatives, plus the expansion of the fulfillment network will support Zalando’s growth trajectory going forward. Initial work around its new fulfillment center in Lahr and the full build-out of its facility in Mönchengladbach have started and are on track.

Fast growth coupled with profitability in the first nine months

The adjusted EBIT for the first nine months of 2015 increased by EUR 19.5 million to EUR 35.7 million, corresponding to an adjusted EBIT margin of 1.7 per cent (9M 2014: EUR 16.2 million, 1.0 per cent). For the seasonally weaker third quarter, in contrast, the adjusted EBIT decreased to EUR -23.5 million (Q3 2014: EUR 3.8 million). Gross margin remained at third quarter 2014 level, but fulfillment and marketing costs were higher: Fulfillment costs were impacted to secure a first-class customer experience even with fast-growing volumes and rose due to continued investments into the customer proposition and technology as well as lower than expected debt collection rates related to fraud cases in the first half of 2015. Marketing costs increased due to a fall/winter season switch in September 2015, compared with a late switch in October 2014, as well as strategic marketing investments into app downloads.

Zalando’s third-quarter report is available online, details can also be found in the earnings presentation. Zalando will report figures for the fourth quarter and full year 2015 on March 1, 2016 and publish a trading update prior to that. The publication date of the trading update will be announced on the Zalando Investor Relations website in advance. 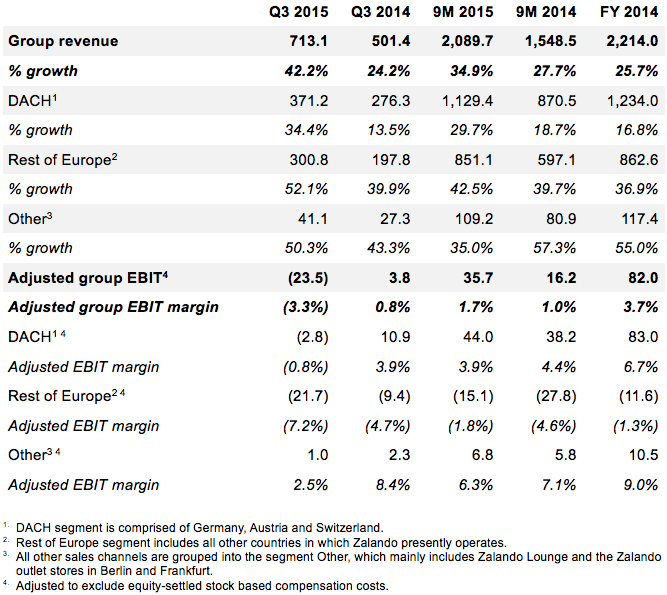 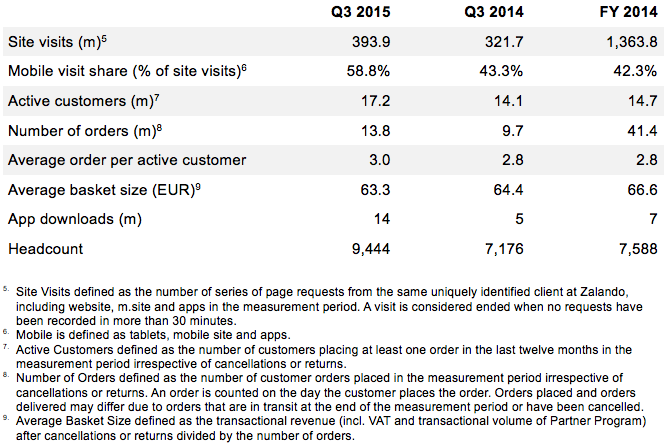 ABOUT ZALANDO
Zalando (https://corporate.zalando.com) is Europe’s leading online fashion platform for women, men and children. We offer our customers a one-stop, convenient shopping experience with an extensive selection of fashion articles including shoes, apparel and accessories, with free delivery and returns. Our assortment of over 1,500 international brands ranges from popular global brands, fast fashion and local brands, and is complemented by our private label products. Our localized offering addresses the distinct preferences of our customers in each of the 15 European markets we serve: Austria, Belgium, Denmark, Finland, France, Germany, Italy, Luxembourg, the Netherlands, Norway, Spain, Sweden, Switzerland, Poland and the United Kingdom. Our logistics network with three centrally located fulfillment centers in Germany allows us to efficiently serve our customers throughout Europe. We believe that our integration of fashion, operations and online technology give us the capability to deliver a compelling value proposition to both our customers and fashion brand partners.

Zalando’s shops attract over 131 million visits per month. In the third quarter of 2015, around 59 per cent of traffic came from mobile devices, resulting in close to 17.2 million active customers by the end of the quarter.