Boulogne-Billancourt, France, 2015-3-10 — /EPR Retail News/ — Since it was first set up in 2011, all of the countries in which the Group operates have been following the Women Leaders programme. Each country has committed to it and introduced Best Practices. The resulting synergy has had tangible effects on turnover. There has been a notable increase in the numbers of women managers – nearly 37% in 2014, a 8,9% increase since 2009. However, the “Glass ceiling” effect is still a reality when it comes to Managerial and Senior Managerial posts. The countries are therefore stepping up their initiatives to promote a better gender balance.

Globally, Asia has seen the biggest increase in the numbers of women. Women currently account for nearly 39% of all Carrefour managers in Asia. That’s the highest percentage across the whole group! In 2014, China appointed nine women to Managerial or Senior managerial posts! And Taiwan has optimum gender equality among its Managers: 50% men and 50% women.

In Europe, there has been a significant increase since 2011 in the numbers of women in Senior Managerial posts – they accounted for 12% in 2014. France saw the highest number of women being appointed to managerial or senior managerial posts in 2014: a total of 19!It should be pointed out that women now account for 40% of Romania’s Executive Committee – that’s the highest percentage of all countries in which the Group operates.

In a bid to involve as many of its employees as possible, Argentina staged the Women Leaders Convention last June. The purpose of this event which brought together 140 managers and directors was to raise managers’ awareness of the Women Leaders programme and get them involved. One of the outcomes was the signing of a meeting charter which defines – among other things – working hours so that family life can be preserved.

France and its Executive Committee are also involved: they signed up to 15 commitments designed to promote a better work-life balance last July as part of a charter proposed by the Ministry for Women’s Rights. Carrefour Market has introduced a number of initiatives designed to promote gender equality in recruitment, training, remuneration and promotion, and has been awarded the Professional Equality label in recognition of its efforts.

Italy has launched a mentoring programme whereby 22 women senior managers are invited to mentor female employees with career opportunities. These women are mentored and coached so as to help them with their professional development. France, Argentina and Carrefour Management have also introduced this programme.

Four countries / Business Units have received the GEEIS (Gender Equality European – International Standard) award this year: Argentina, Romania France Hypermarkets and France Supermarkets. This award has also been presented to the Group in recognition of the relevance of its best practices and of its global Women Leaders initiative. 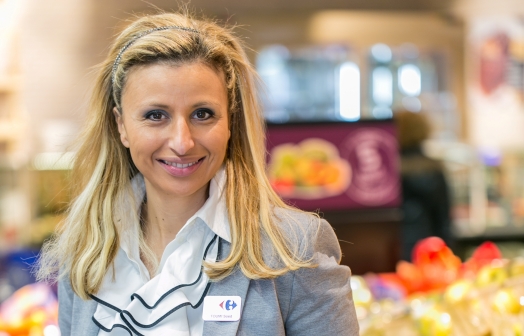 Carrefour: notable increase in the numbers of women managers – nearly 37% in 2014