Minneapolis, MN, 2016-May-17 — /EPR Retail News/ — Last week, Aaron Neuhouser climbed the steep face of a Himalayan mountain for an incredible view — and he did so without ever taking his feet off the ground or leaving the United States.

Aaron was at the Best Buy store at Mall of America in Bloomington, Minnesota, where he had an opportunity to experience the highly anticipated Oculus Rift virtual reality headset for the first time.

Best Buy is the first and only U.S. retailer where customers can try out Oculus Rift, with free in-store demos at 48 stores across the country. Hundreds of people have already participated, and the time slots for demos at many stores are booked up for days — or even weeks — in advance.

The demos feature two virtual reality experiences. There’s The Climb, the rock-climbing game that Aaron played, and there’s Dreamdeck, which transports you to places like the top a skyscraper or an alien encounter in outer space.

Haven’t tried VR yet and wondering what you can expect?

“A whole lot of awesomeness,” said Blue Shirt Tim Davis, an Intel Experience Expert at the Mall of America store.

This is expected to be a breakthrough year for VR because the immersive technology is getting easier for consumers to acquire. The Consumer Technology Association (CTS) estimates that virtual reality headset sales will increase 500 percent to 1.2 million units in 2016.

If you want to experience the fully immersive world of virtual reality for yourself, sign up for a demo at live.oculus.com. If time slots are full, try to score one of the walk-up sessions by visiting the store. To find a list of locations, visit BestBuy.com/Oculus. 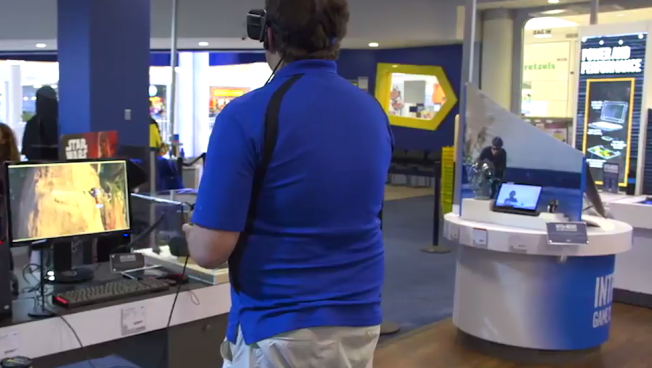 Best Buy the first and only U.S. retailer where customers can try out Oculus Rift

Virtual reality, or VR, is a new technology that allows users to immerse themselves in lifelike locations — like a packed concert or the depths of the ocean — using a headset that’s paired with a PC, smartphone or other device. The technology lets you live in your favorite video game or even virtually “hang out” with friends from the comfort of your own home. The possibilities are endless, and this is the year VR becomes more accessible to consumers.

Many gamers and tech types are super excited about the new devices. Many others have questions  about the new technology and its uses.

Sid is a sales consultant at Best Buy in Los Angeles by day and a hardcore gamer by night. His passion for technology extends beyond his shifts at Best Buy, as he spends his free time listening to gaming podcasts and keeping up with the latest VR news. He took some time out of his busy day to answer a few questions about the new technology.

1.   What are you most excited about when it comes to VR?
It’s the evolution of the television, where you’re no longer confined to a fixed screen when viewing media, whether it’s a movie, your favorite TV show or a video game. By putting on a headset, VR allows you to experience it firsthand. I’m most excited about the impact it will have on video games and creative works, such as movies.

2.   Is it only for gamers?
No. It’s true that VR will create a deeper gaming experience because video games already are so interactive and PC gaming, specifically, intersects well with VR. But there are, and will be more, practical uses for the devices. Imagine training for surgery; touring a new house or cool city from afar; attending sporting events, or even seeing the president’s speech as though you were in the front row – all through VR. Those are just some of the uses, and we will see many more.

3.  How should customers prepare for virtual reality?
PC gaming systems play a big role in VR.  For most experiences, customers need a high-powered, compatible computer. (For example, to pre-order the Oculus Rift headset through Best Buy, you’ll need to choose one of seven Oculus-ready PCs to go with it.) Other systems, like the Samsung Gear, require a compatible Samsung smartphone.

4. What is the one thing people should know about VR?
People shouldn’t feel intimidated. This is the future. Virtual reality has the potential to change the way we consume our media.

Pre-order Oculus Rift on BestBuy.com now. It should be available later this spring. 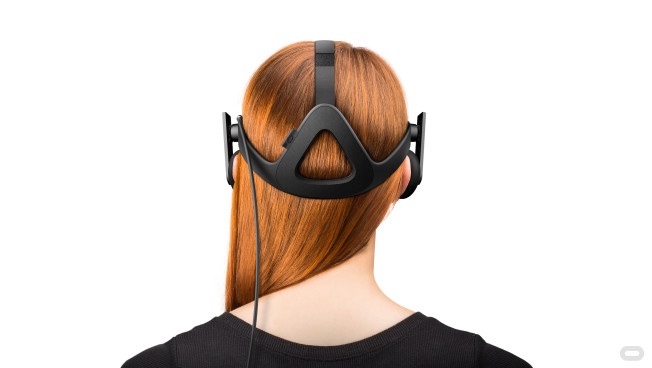