“Guests nationwide turned out online and in stores to take advantage of Target’s Black Friday deals,” said Brian Cornell, Target’s Chairman of the Board and CEO, who greeted holiday shoppers at a store in New York on Thanksgiving. “We have great deals on top gifts and a shopping experience that can’t be beat. I’m encouraged by the early results and am confident guests will love the deals they’ll find throughout the weekend and the holiday season.”

Online, Target doorbusters were available starting early in the morning on Thanksgiving. The number of orders and sales increased more than 40 percent over last year, making it the retailer’s biggest online sales day ever. The most growth in traffic and sales came from mobile. Top-selling items included the iPad Air 2 and iPad Mini, Nikon L330 camera, Beats by Dre Solo HD headphones, the Dyson DC50 Allergy vacuum and the Sony Playstation 4 Bundle.

Across the country, families began gathering hours before the 6 p.m. opening in lines of hundreds and sometimes thousands of people. To engage with guests, Target handed out more than half a million Christmas crackers, a symbol that is synonymous with the holidays in many parts of the world. Just as the Christmas cracker is featured in Target’s Black Friday advertising to reveal top deals, guests waiting in line received Christmas crackers filled with coupons and $575,000 in gift cards.

Throughout the evening, Target encouraged guests to share their selfies using the hashtag #salefie on Instagram and Twitter for a chance to win up to $10,000. The company saw an enthusiastic response with thousands of guests sharing their #salefies.

Top-selling items in store were in electronics and housewares, including:

To commemorate the start of the holiday shopping season, Cornell will join other executives and store leaders to ring the opening bell at the New York Stock Exchange. The group will have two special guests: the young star of Target’s holiday TV commercials and Bullseye, Target’s bull terrier mascot.

Black Friday savings will continue through the weekend with several additional offers. For the first time, from 6 a.m. to noon on Friday, Nov. 28, guests can purchase up to $300 in Target GiftCards at 10 percent off in stores and at Target.com. Cartwheel, Target’s mobile savings app, will feature exclusive deals, with 30 offers at least 25 percent off through Saturday, Nov. 29.  Some of the top deals include 40 percent off CorningWare 6 Piece Bakeware Set, 30 percent off Fieldcrest bath towels and rugs, and up to 50 percent off popular grocery and seasonal items like Ghiradelli holiday gifts. Finally, Saturday-only deals will be available in Target stores and at Target.com, including 40 percent off Philips string lights and BOGO free all single-roll wrapping paper. As always, all REDCard holders will enjoy an additional 5 percent off purchases.

About Target
Minneapolis-based Target Corporation (NYSE: TGT) serves guests at 1,934 stores – 1,801 in the United States and 133 in Canada – and at Target.com. Since 1946, Target has given 5 percent of its profit to communities, that giving equals more than $4 million a week. For more information, visit Target.com/Pressroom. For a behind-the-scenes look at Target, visit ABullseyeView.com or follow@TargetNews on Twitter. For more information, visit Target.com/Pressroom. 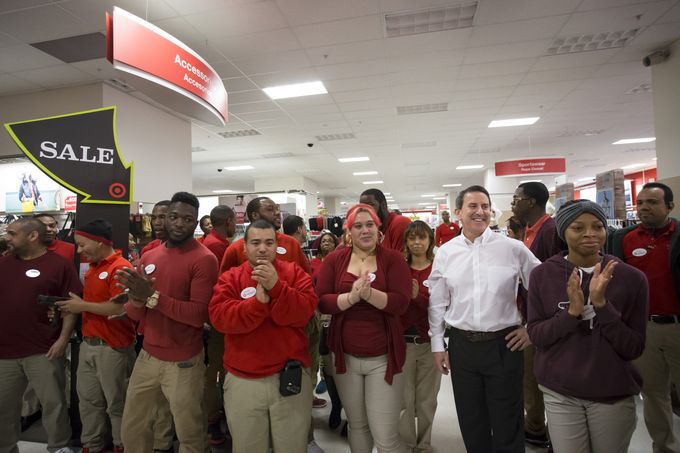