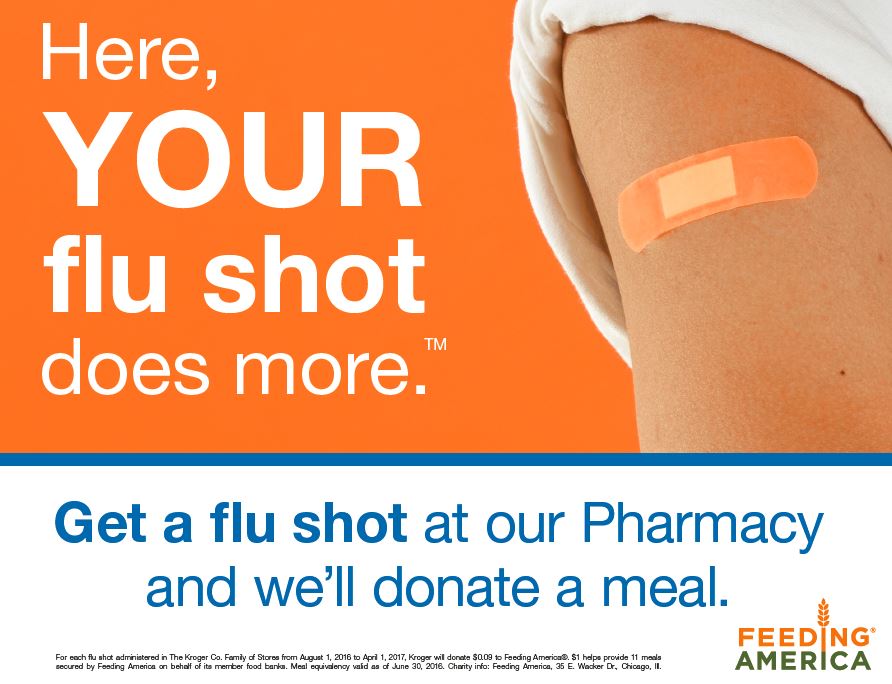 “This year, receiving your flu shot at Harris Teeter will do more than protect you and your family’s health,” said Danna Robinson, communication manager for Harris Teeter. “For every flu shot administered in our pharmacies, we’ll provide a meal for a neighbor struggling with hunger. We have a long-standing history of promoting healthy communities and serving our neighbors in need. We’re proud to continue that tradition by merging this preventative health & wellness program with our commitment to our supporting food insecure households in our local communities.”

Every year in the United States more than 200,000 individuals are hospitalized by influenza. The Centers for Disease Control and Prevention recommends a yearly flu vaccination for everyone six months and older by the end of October. Flu shots can reduce the risk of more serious symptoms and outcomes, including flu-related hospitalizations.

“Harris Teeter is deeply committed to feeding community members in their neighborhoods who are facing hunger,” said Kay Carter, CEO of Second Harvest Food Bank of Metrolina. “This new campaign protects Harris Teeter shoppers this flu season and raises awareness to the thousands of children, seniors and hardworking men and women throughout our communities who struggle with hunger every day.”

About Feeding America
Feeding America is a nationwide network of 200 food banks that leads the fight against hunger in the United States. Together, we provide food to more than 46 million people through food pantries and meal programs in communities throughout America. Feeding America also supports programs that improve food security among the people we serve; educates the public about the problem of hunger; and advocates for legislation that protects people from going hungry. Individuals, charities, businesses and government all have a role in ending hunger. Donate. Volunteer. Advocate. Educate.  Together we can solve hunger. Visit http://www.feedingamerica.org/. Find us on Facebook at www.facebook.com/FeedingAmerica or follow us on Twitter at www.twitter.com/FeedingAmerica.