Beverly Hills, Calif., 2016-Jun-20 — /EPR Retail News/ — Today, Netflix reveals Orange is the New Black is one of its most re-watched original series. Examining viewing in over 190 countries, Netflix found more than half (53%)* of Orange viewers have re-watched at least one full season of the acclaimed series since its debut in 2013. Not surprisingly, this re-watching behavior peaks each June in anticipation of the new season, this year being no exception.

In advance of the Orange is the New Black season 4 debut – arriving worldwide Friday, June 17 – Netflix also surveyed** fans around the world to see how they plan to prepare for their return to Litchfield.

Of viewers polled, nearly a quarter (21%) plan to re-watch the previous season while 41% plan to re-watch the entire series – all 36 episodes. They’re eager to serve their time too with 54% planning to re-watch this weekend or sooner, and fans are even willing to give-up making their bed (30%), cleaning the house (36%) and cooking (10%) in order to have more time to watch .

Overall, most plan to re-watch without incriminating others – 36% prefer to re-watch solo, 8% with their pets and 12% with a table full of snacks (be careful with the pie). Those who prefer to have partners in crime will re-watch with their significant other (25%) or friends (14%). The majority of re-watching lock downs will take place in the living room (43%) followed by the bedroom (41%) – no one chose the SHU.

The art of re-watching takes both a practical and emotional form. Top reasons for re-watching include looking for possible foreshadowing in previous story lines (25%) and reliving moments with favorite characters (29%). However, for others (25%) it’s as simple as Orange is the New Black being their favorite show and they just can’t get enough.

For those who only have time for a shorter sentence – like the 23% of respondents who plan to re-watch just a few episodes – Netflix also released the series most re-watched episodes. As expected, viewers prefer to re-indulge in the last three episodes of a season, but the one that remains supreme is, of course, Season 1, Episode 1 – you never forget your first time:

*Data reflective of global accounts who have completed watching Orange is the New Black and have re-watched at least one season of the series.

**The survey was conducted by Google Consumer Surveys, June 2, 2016 – June 10, 2016 and based on 1,613 responses. The sample was the national adult internet population in the US, Mexico, UK and Canada. Survey respondents must have confirmed their intent to watch and prepare for season 4 of Orange is the New Black to participate. Overall RMSE score is 4.84%.

Netflix is the world’s leading Internet television network with over 81 million members in over 190 countries enjoying more than 125 million hours of TV shows and movies per day, including original series, documentaries and feature films. Members can watch as much as they want, anytime, anywhere, on nearly any Internet-connected screen. Members can play, pause and resume watching, all without commercials or commitments. 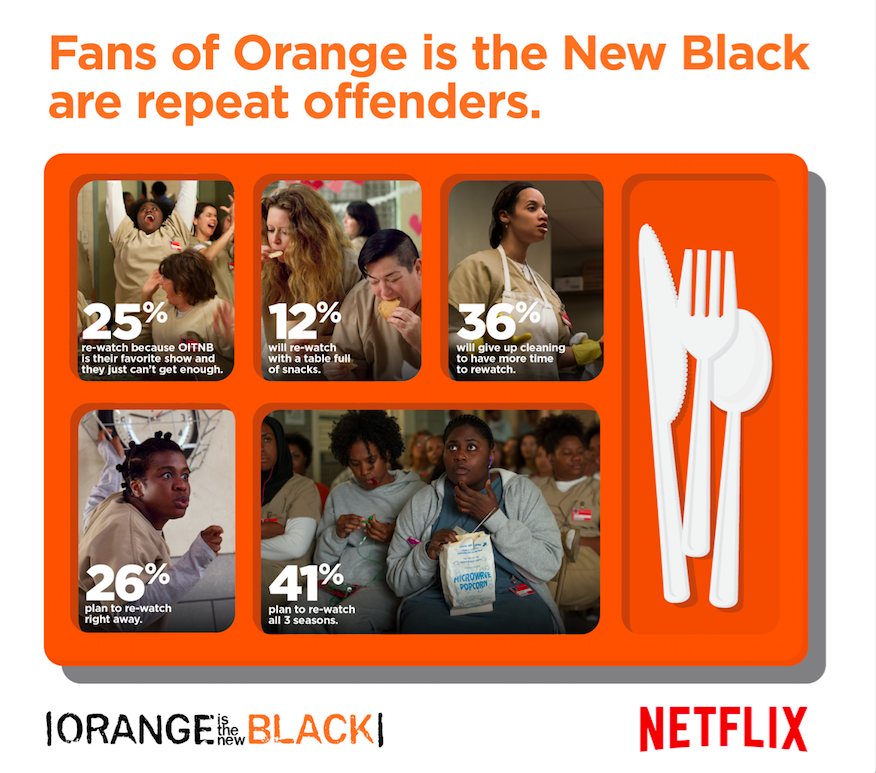