Perth, Australia, 2016-Feb-11 — /EPR Retail News/ — The ACO is pleased to announce that its longstanding partner, Wesfarmers Arts, has expanded its support of the Orchestra to become Principal Partner of ACO Collective. Wesfarmers has supported the ACO’s Perth Series and WA regional touring activities for 18 years, so it is fitting that this visionary partner joins with ACO Collective to help it reach even greater heights.

The expanded partnership coincides with the change of name of the ACO’s regional touring and mentoring orchestra from ACO2 to ACO Collective and the appointment of Pekka Kuusisto as its Artistic Director.

Guido Belgiorno-Nettis AM, the ACO’s Chairman said “with the generous support of its Principal Partner Wesfarmers, ACO Collective will continue its extensive regional touring and education programs.”

Wesfarmers Managing Director Richard Goyder AO, said the new partnership with ACO Collective would support a truly national connection between the community and musicians and music education of the highest quality in Australia and the world.

“Eighteen years after we first worked together to bring this wonderful orchestra to Perth on a regular basis, we are now delighted to be able to help the ACO reach out into our regional communities in Western Australia and nationally,” Mr Goyder said.

In acknowledgement of ACO Collective’s coming of age, ACO Artistic Director Richard Tognetti has chosen the ensemble to open the ACO’s 2016 National Concert Season with an 11-concert tour of Sydney, Melbourne, Brisbane, Canberra, Adelaide and Newcastle.

Kuusisto’s second tour of the year with ACO Collective sees him return to WA to lead the ensemble on a tour to Albany, Manjimup, Margaret River, Bunbury, Mandurah and Geraldton from 29 April to 8 May 2016. ACO Collective performs works by Vivaldi, Piazzolla, and Philip Glass, as well as presenting free schools concerts and education workshops for local string students.

ACO Collective is the ACO’s critically acclaimed 17-piece string ensemble which delivers the ACO’s regional touring and education programs Australia-wide. ACO Collective combines musicians of the ACO with Australia’s most talented young professional musicians at the outset of their careers, creating a combined ensemble with a fresh, energetic performance style. These young professionals have all participated in the ACO’s year-long Emerging Artists’ Program and are in demand from Australia’s professional orchestras, but dedicate themselves to the ACO’s high-octane performance style for intense touring periods.

ACO Collective commenced touring as ACO2 in 2007 and since then has performed in more than 80 regional centres in every state and territory, all of Australia’s state capitals, and has toured to Japan. The Ensemble works regularly with guest artists of the highest calibre, both international and Australian, including violinists Elizabeth Wallfisch, Benjamin Schmid, Henning Kraggerud and Thomas Gould; cellist Daniel Müller-Schott; harpist Alice Giles; recorder virtuoso Genevieve Lacey; singer/ songwriter Tim Freedman from The Whitlams; and oud player Joseph Tawadros.

In 2013, the ACO presented ACO Collective in a National Concert Season Tour led by Richard Tognetti which was named by The Australian as “one of the year’s must-see concerts”. Biennially, ACO Collective is the Orchestra-in-Residence at the Vasse Felix Festival in the Margaret River, Western Australia. 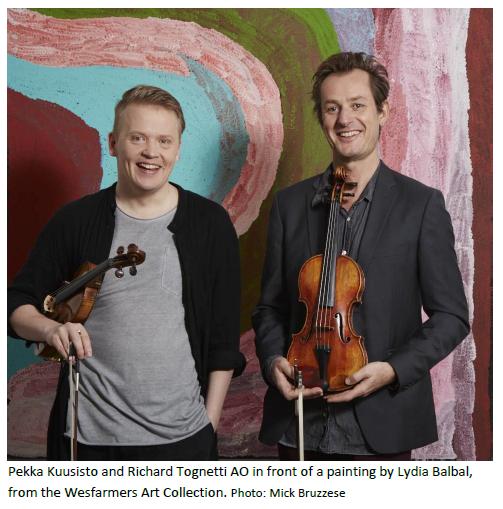