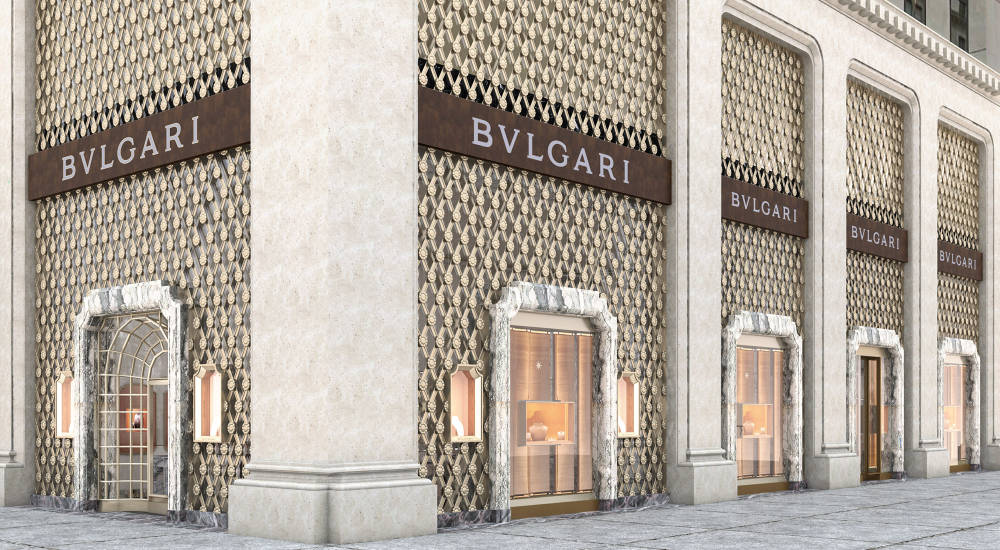 In the 1970s Bulgari opened its first store in New York. With its distinctive avant-garde spirit, the Roman Maison brought the essence of Roman lifestyle across the Atlantic to celebrate the city that never sleeps, becoming the jeweler of the modern woman.

Forty years after opening its first store, at the end of 2017 Bulgari has reimagined its flagship, which boasts one of Manhattan’s most strategic locations, on the corner of 5th Avenue and 57th Street. Created by Peter Marino, the store’s design concept draws inspiration from architectural elements of the mythic Bulgari flagship store on Via Condotti in Rome, proposing a timeless yet contemporary vision of the Eternal City.

Combining classic and contemporary, tradition and innovation, the space becomes an invitation to travel through the Roman Maison’s 130-year history. Roman inspiration is omnipresent, referencing the Pantheon in Rome and the geometric circle and square motifs that grace the building’s precious floor. The best of Italian craftsmanship is showcased in more than 30 meticulously selected traditional noble materials, including marble, different tones of marmorino, precious walnut, iron, brass, silk and velvet.

To fete the redesign of the store the Maison has also created the Bulgari New York Collection, featuring Roman sophistication and joie de vivre, along with a tribute to America’s famous Stars and Stripes flag. Among the most magnificent pieces in the collection is a necklace made of a blue, red and white cascade, with alternating tanzanite, rubelite and diamonds. There is also a Serpenti bracelet in white gold set with pavé diamonds, lapis and coral.

Christian de Portzamparc began his research for the new project back in 2011 by delving deep into the Christian Dior archives. Inspired by the architectural precision with which Monsieur Dior constructed his gowns, he integrated this into his own vision for a building formed of eleven white sails falling in soft, fluid folds, like the plain “toiles” from which the couturier sculpted his designs. Transforming the vision into reality was a feat of modeling and construction, culminating in the official opening on June 20th after a vastly ambitious and meticulous building program.

The new boutique – or House of Dior – presents the Dior universe over six floors in a décor of wood, lacquer, leather and weaves created by interior designer Peter Marino. As they enter the boutique, visitors are welcomed by a suspended Lee Bul sculpture, which dominates the dedicated accessory space. Further on, a staircase unfurling like a ribbon of mirrors leads to the first ever exclusive Dior Homme boutique, as well as to women’s ready-to-wear, watches and jewelry. On the fourth floor, an art gallery and its private salons display a selection of artworks chosen by Dior, while the top floor, opening onto a terrace, is devoted to the Dior Café, with a menu composed by Pierre Hermé.

In conjunction with the opening of this exciting new address, the House is also staging the Esprit Dior exhibition at the Dongdaemun Design Plaza until August 25, 2015. Celebrating Dior’s unique creative alchemy, the exhibition draws on the House archives, highlighting the iconic designs that have shaped its history and retracing its long-standing ties with the world of art. At the heart of the exhibition, a series of works specially created for the occasion by contemporary Korean artists offers a fresh vision of Dior.

The first French architect to be awarded the prestigious Pritzker Prize in 1994, Christian de Portzamparc also designed the LVMH Tower in New York, and the Chai sur la Colline winery for Château Cheval Blanc in Saint-Emilion.