SEATTLE, 2015-9-15 — /EPR Retail News/ — A Starbucks barista might have missed his big chance to appear on The Ellen DeGeneres Show. And, he’s okay with that.

A Starbucks barista might have missed his big chance to appear on The Ellen DeGeneres Show. And, he’s okay with that.

Eric Calderon wanted a job that gave him opportunities to interact with customers, so he joined Starbucks four months ago as a barista in Webster, Texas.

“I really just want to brighten someone’s day, and I’m always looking for ways to make people laugh or smile,” said Calderon. “Life is serious enough, so why not lighten things up when I can?”

Earlier this week he noticed two guys in the drive-thru who sounded like they were having a good time. When they pulled up to the window to pick up their order, Calderon overheard their music blaring and couldn’t hold back.

He raced to the window and started dancing to the song that was playing – “Can’t Feel My Face” by The Weeknd, a song that’s topped Billboard’s Hot R&B/Hip Hop chart. After watching in amazement for a while, one of the customers recorded a video and posted it to his Facebook account.

The social news site BuzzFeed picked up the 14-second clip and tens of thousands of video views later Calderon was getting texts and calls from friends who recognized him.

“I came in to work the next day and was told The Ellen DeGeneres Show wanted to talk to ‘the barista who was dancing in the drive-thru’ and I thought it was a joke,” he said. “We were really busy in the store so I told them to call me back later when I’m on my break.”

When a show producer called the second time, Calderon was taking care of customers and again he asked them to call back later.

The show hasn’t gotten back to him since.

At this point Calderon thinks he missed his opportunity. But if the show does call, he’ll be ready for a dance-off with Ellen who’s known for dancing with celebrities on her show.

“I don’t really have any signature moves,” he said. “I just let the music take my body where it wants to go.”

In the meantime, Calderon said he’s happy to stick with his day job and is interested in working his way up to shift supervisor and store management with Starbucks. 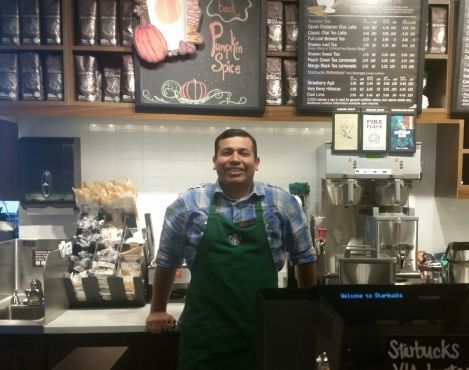