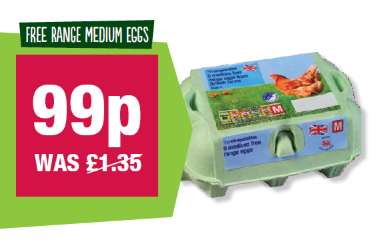 Bradford, England, 2015-2-16 — /EPR Retail News/ — Morrisons has announced that from today it is cutting the regular price of more than 130 shopping basket staples by an average of 22 per cent. These are items that most customers put in their baskets most regularly.

The price of essentials such as bread, milk, butter, eggs, coffee, sugar, fruit juice and pasta will be reduced.

The price cuts, led by Morrisons, are an important contributor, to the falling rate of inflation highlighted by the Bank of England last week.  Governor Mark Carney said that the UK might experience deflation in the spring.

This round of cuts will be across both big-brand and own-brand products including:

Morrisons Group Marketing and Customer Director Nick Collard said: “These are ongoing lower price cuts, not promotions.  The price cuts we have now made across products that customers buy week in, week out, are making a real difference to the cost of the weekly family shop.”

LONDON, 2015-1-7 — /EPR Retail News/ — Sainsbury’s has today announced over 1,000 price cuts on some of its most popular products – including British essentials for a Sunday lunch or a full English breakfast.

The retailer is using an annual £150m price investment to cut regular prices on over 1,000 of the most popular items in customers’ baskets – the things customers really buy each week.

Customers will see over 700 new regular prices in supermarkets this week in addition to over 200 put in place following a first round of cuts in November. These are in addition to the thousands of promotions that the supermarket runs each week.

And because it’s Sainsbury’s, responsibly sourced products such as Scottish salmon and British bacon and lamb are among the products that will go down in price.

Sainsbury’s CEO Mike Coupe said: “We are investing £150 million per year for the next three years in some of our customers’ most popular purchases, with a total of 1,000 prices cut since we announced this investment in November. This will come as welcome news to customers who might be feeling the pinch after Christmas.

“These lower everyday prices are a part of our ongoing commitment to offering our customers great quality products at great prices.”

Sainsbury’s announced over 1,000 price cuts on some of its most popular products