SEATTLE, 2016-Jan-25 — /EPR Retail News/ — When he was homeless, Matthew Tej kept a keychain in his pocket as a reminder that one day he’d have his own place to live in New York. Now the Starbucks barista is handing keys to others as he begins a second career as a real estate agent.

“I remember how I felt when I got my first apartment. I’m excited to experience that feeling through someone else when they get their property. It seems like a natural progression for my life story so far,” said Tej, who still works as a Starbucks barista.

Last year was a whirlwind for Tej, who wrote this personal essay early in 2015: “Inspired by Starbucks, a Young Man Overcomes Homelessness.” Although there were many days when “the negatives seemed to outweigh the positives,” Tej persevered. “I’ve learned life is filled with obstacles and you can’t change that,” he wrote. “But no matter what challenges you face, you always, always have a say in who you are and in the kind of person you will be.”

Soon after writing about his experience for fellow Starbucks partners (employees), Tej was invited to share his story through a video at Starbucks 2015 Annual Meeting of Shareholders. Standing backstage in a suit and tie, he acknowledged, “I’m grateful for all that’s happened, and my story is just beginning.”

Months later, walking amid New York’s skyscrapers, he thought about applying the customer service skills he honed through Starbucks to another profession – selling real estate in the Big Apple.

“I had to make a difficult decision,” he said. “I love Starbucks so much. The people in my store were like family to me. I remember crying after I told my partners I would be pursuing another career.”

He continued to work at Starbucks during the day while he took evening and weekend classes to earn his Real Estate Salesperson License in four weeks, passing the final exam in November. Though his store partners were supportive, some cautioned him to “give yourself a break. All you do is work.”

“People would say, ‘You need to have a life, too,’” he said. “They didn’t understand that I’m doing exactly what I want and need to do. I’m building a life.”

He also enjoys being with other Starbucks partners and offers this advice for those who are considering the next step on their career ladder:

“In life, if success is defined by how happy and fulfilled you are, then the formula for that is simple – vision plus integrity. If you can develop the integrity to stick to that vision and place it before everything in life, it will manifest itself.”

This is Matthew’s Starbucks story, what’s yours? Email: newstips@starbucks.com 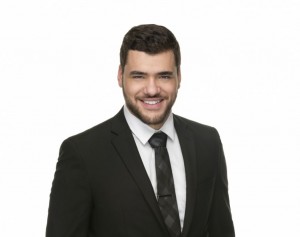