While the fairly dramatic increase in long-term interest rates that occurred in late Q4 2016 continued into early Q1 2017, its impact on commercial real estate markets has been fairly limited, especially given the more recent decline in Treasury rates. 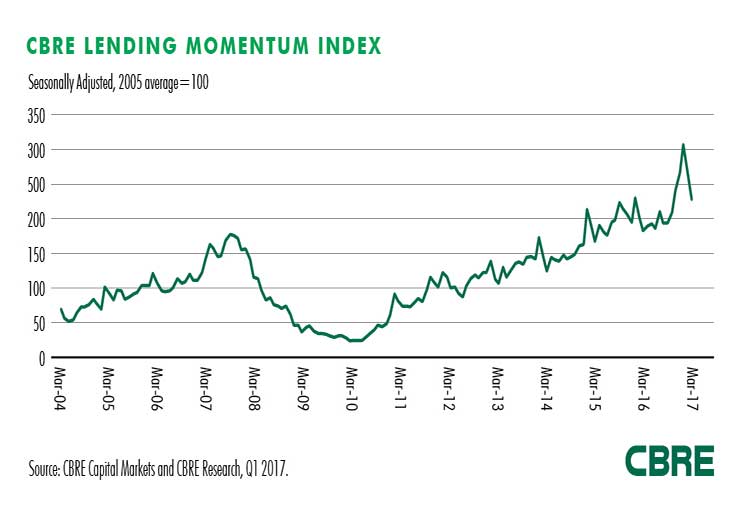 Life companies led all other major lenders in Q1 2017 and increased their share of loans closed by CBRE Capital Markets. They accounted for more than 37% of non-agency commercial loan closings in Q1 2017, up from 34% in Q4 2016, and well above their 27% share recorded in Q1 2016.

While banks maintained their standing as the second most popular lending group in Q1, their market share slipped substantially to 25.5% of loan volume, down from 43% a year earlier. Many key bank interest rates and spreads have not been materially affected by the recent increases in Treasury rates. However, bank construction lending remains limited and banks are selective in granting loans.

CMBS lenders have incrementally improved their share of closings over the past year, as the loan pricing environment has become more favorable and issuers have created structures to satisfy risk-retention requirements. However, CMBS continues to lag other major lending groups by a considerable margin. CMBS lenders accounted for 15.8% of non-agency lending volume in Q1, up slightly from their 11.7% share a year earlier.

The “Other” lender category, which includes REITS, private lenders, pension funds and finance companies, continues to play a significant role in providing a variety of bridge, permanent loan and construction financing. They accounted for 20.7% of non-agency volume in Q1, down slightly from 24.1% in Q4 2016. 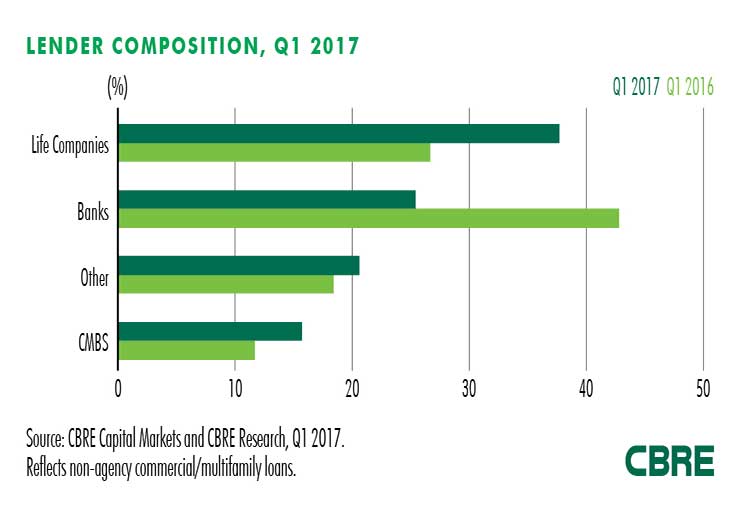 To request a copy of the Q1 2017 edition of CBRE’s U.S. Lending MarketView Snapshot or to speak with a CBRE expert, please contact Ayana Miller (212.984.6506 or ayana.miller@cbre.com).