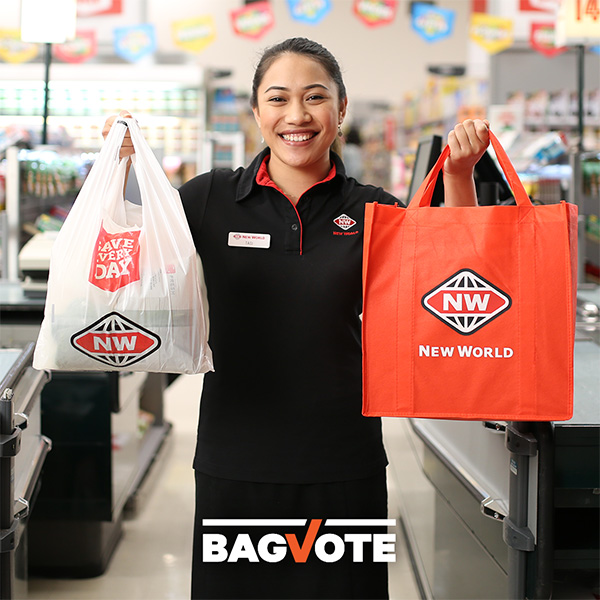 AUCKLAND, New Zealand, 2017-Sep-15 — /EPR Retail News/ — New World supermarkets are giving customers the opportunity to vote on whether to keep plastic bags free or bring in a five or 10 cent charge for each plastic bag they use at the checkout – in a concerted effort to reduce pollution.

If customers vote to pay for bags, New World will donate the proceeds from the bag charge to a variety of community and environmental causes including SEACLEANERS, who work to remove rubbish from waterways around New Zealand.

Steve Anderson, Managing Director Foodstuffs New Zealand says, “We have been working on a wide variety of environmental initiatives for years now, but the one issue that seems to really energise our customers is the topic of plastic shopping bags.  We believe the best way forward is to work with our customers and ask them what they want for the future.  The majority decision in BAGVOTE will rule – but regardless of the outcome, we’ll continue to work on reducing plastic bag use, providing more reusable bag options and increasing soft plastics recycling.”

New World customers can submit a vote online at www.bagvote.co.nz from midday 14 September through to midnight on 8 October 2017.  New World will then publish the results on Tuesday 10 October.

Anderson says, “We believe there is a real appetite for change on this issue.  Our recent ban on plastic microbeads was met with universal support as was the introduction of 100 percent recyclable meat trays. We’re also rolling out electric vehicles across many of our stores and increasing access to soft plastics recycling around the country.”

As further evidence of New World’s commitment to reducing bag usage, North Island owner-operators have also delivered a five cent rebate to customers who bring their own bags for use at the checkout, which has resulted in up to a 20 percent drop in plastic bag usage since it was implemented in January 2016.  The rebate will continue regardless of the BAGVOTE outcome.

SEACLEANERS has been invited to advise the New World team on more ways to protect the environment.

“SEACLEANERS is an inspiring team with a powerful mission – to remove rubbish from our seas, harbours and oceans.  Since 2002 their team of volunteers has removed 40 million pieces of rubbish from the waters around New Zealand. A great outcome – but shocking to know that so much rubbish is in our oceans,” Anderson says.

SEACLEANERS is delighted to support New World’s campaign to promote awareness about reducing the use of plastic bags.  “Every day we see the effect of improper use and disposal of plastic bags in our waterways,” says Captain Hayden Smith, who was voted Local Hero 2017 and is recognised internationally for the work he and his team do to clean up our seas.

“When New World asked us to get on board and help promote awareness of the BAGVOTE we were really happy to support them.  We hope that New Zealanders make the simple change to using more cloth reusable bags, and accept a charge for plastic bags if they absolutely need one.”

For more information on the New World Plastic Bag Vote head to www.bagvote.co.nz.