Boulogne-Billancourt, 2016-May-24 — /EPR Retail News/ — The FROM Nord producers’ organisation has just been awarded MSC certification for its artisanal and sustainable fishery, having had Carrefour’s support throughout the assessment process. An opportunity to take a look at the Group’s various other commitments to preserve the planet’s biodiversity.

What’s the point in purchasing MSC-certified fish?
The Marine Stewardship Council (MSC) is a label that serves as a means of identifying fish that have been caught using sustainable fishing methods; it is awarded by an independent body.
–    The various reference frameworks and methodologies that make up this programme have been developed with the help of scientific experts throughout the world
–    The MSC guarantees that seafood products that bear this label:

–    By choosing to purchase MSC-certified seafood products, consumers are able to do their bit to preserve our planet’s oceans.

What the Carrefour Group is doing
Carrefour encourages responsible consumption of seafood products:
–    It has ceased selling more than 10 species which are under threat
–    We use sustainable aquaculture, with fish-farming practices that limit the impact on the environment

–    In France, 50 of our Carrefour-brand products have been certified in accordance with the MSC standard
–    Carrefour also sells tinned tuna which has been caught using the pole and line method – a selective fishing technique which spares young tuna and avoids non-target species being caught
–    Carrefour calls regular meetings of an advisory committee made up of four NGOs and two suppliers in order to discuss action plans involving marine resources

Focus on France
On 12 May, the FROM Nord producers’ organisation was awarded MSC certification with Carrefour’s support.
–    This is the first time in France that a retailer has lent its support to a fishing organisation within the framework of its MSC assessment.
–    Of the 10 species of fish which are most frequently purchased by French households, sole has a key role to play in helping to maintain the balance of resources.

Carrefour encourages biodiversity, is stepping up its presence in local communities and is cementing the relationships it has with the local economic stakeholders from which it gets its supplies on a day-to-day basis. 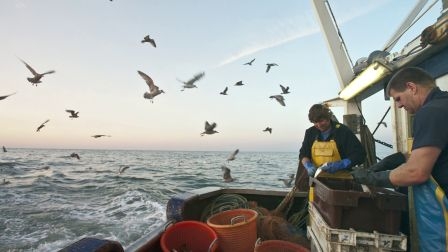