Arteixo, Spain, 2016-Jul-21 — /EPR Retail News/ — Inditex’s shareholders met today at the company’s headquarters in Arteixo for the Annual General Meeting.  During the meeting, Pablo Isla, the Group’s chairman and chief executive, reviewed Inditex’s earnings performance for 2015, noting that revenue and profits reached €20.9 billion and €2.89 billion, respectively, leading to a dividend payout of €0.60 per share. He also noted that the Group’s store count has now exceeded 7,000 across 88 markets with an online presence in 29 of those markets.

During his presentation, Mr Isla announced the launch of mobile payment in all of the Group’s stores in Spain from September. This new customer offering will be made available within the online apps of all eight of Inditex’s retail brands (Zara, Pull&Bear, Massimo Dutti, Bershka, Stradivarius, Oysho, Zara Home and Uterqüe), as well as via a new Inditex app, InWallet, which shoppers will be able to use to pay for purchases made in any of the Group’s stores in Spain. In both instances, the service will enable online and offline receipts, facilitating the elimination of paper receipts.

The new service has been designed to enhance the shopping experience and aims to significantly simplify the purchase and returns process. Customers can activate the service directly from the online app, adding the payment cards they want to use on the account in a safe and secure way.

The app has been developed entirely in-house by Inditex, as part of the Group’s efforts to continually upgrade technology to improve the overall customer experience. In the same vein, Mr Isla also noted the status of the RFID technology rollout across all Zara stores, which is on track for completion by the end of this year and due to be rolled out in the rest of the Group’s brands starting next year.

During his presentation, Inditex’s chairman also emphasized the progress made over the past four years through the Group’s 2011-2015 Environmental Strategy Plan. Specifically, he highlighted the following milestones:

Building on this progress, Mr Isla unveiled Inditex’s new 2016-2020 Environmental Strategy Plan, which further builds on the circular economy model in all phases of the product cycle.

One of the initiatives outlined by Mr Isla includes the development of Inditex’s collection, reuse and recycling programme for end-of-life garments. In September, Zara will implement a scheme for free at-home collection of used clothing when delivering online orders. This pilot test – which is being conducted in collaboration with the Spanish charity Cáritas and transportation firm Seur – will initially trial in Madrid with the aim of gradually introducing the scheme all over Spain.

In addition, Inditex will install between 1,500 and 2,000 garment collection containers in Spain’s main cities, also in collaboration with Cáritas. The charity will sort the clothing to further the garment’s life through its distribution channels or allow for recycling for the development of new textile raw materials. Inditex will donate €3.5 million over two years to this project, which will also encompass the modernisation of Cáritas’s garment sorting and treatment plants. In parallel, Inditex will also place new containers throughout its stores, adding to the existing network, in order that all its bricks and mortar stores in Spain will have a container by September.

Research into and development of cutting-edge recycling technologies

In addition, as part of the Group’s commitment to the circular economy model, it continues to work hard to support the development of textile recycling technology for the creation of new raw materials.

As part of this, Inditex has signed an agreement with Lenzing, the Austrian producer of the plant-based sustainable textile fibre Lyocell TENCEL, for the manufacture of premium textile raw materials from textile waste generated by Inditex.

Throughout the project, Inditex will provide Lenzing with fabric for recycling into new materials. The pilot will start with a contribution of around 500 tonnes of textile waste, with the aim of raising this to around 3,000 tonnes within a few years. This is enough fabric to enable Lenzing to produce around 48 million garments.

Inditex is also championing research into technology for the creation of new textile fibres from recycled garments together with MIT and specific Spanish universities.

Group growth
During the presentation to shareholders, Pablo Isla also emphasised the Group’s sharp growth in all geographies, the progress made within the integrated offline-online store model and the pace of job creation in 2015, a year in which Inditex created 15,800 new jobs, some 4,120 of which were in Spain. In his closing remarks, Pablo Isla referred to Inditex as a people-centred company focused on creative talent, community investment and a sustainable growth strategy.

The company’s shareholders also ratified the 2015 financial statements, the re-election of Flora Pérez Marcote as a member of the Board of Directors and the appointment of Baroness Denise Kingsmill CBE as an independent director. 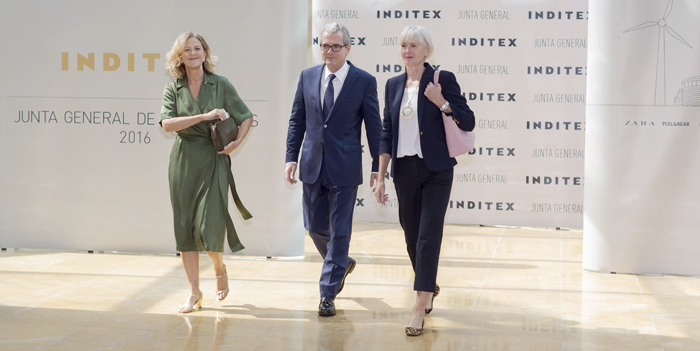