Los Angeles, 2016-Jan-14 — /EPR Retail News/ — Tonight (January 12th 2016), Stella McCartney presented her new Autumn 2016 collection at Amoeba Music in Hollywood and paid homage to the local music culture. Alongside the fashion launch were surprise musical performances by Dhani Harrison, New Orleans’ Dirty Dozen Brass Band, You + Me, a collaboration between P!nk and Dallas Green, Beach Boy, Brian Wilson, and Johnny Depp and Marilyn Manson. This is the first time the designer has shown her collection in Los Angeles and the first fashion event for the iconic and largest independent record store remaining in California.

The new collection illustrating an individual attitude in a playful style combination of sophisticated, sporty and romantic was showcased on models in fun animated vignettes within the record store. Models dressed in the Autumn 2016 looks played with vintage pin ball machines, video games, a jukebox and video screens. The designer’s signature take on masculine and feminine dressing was well represented in the collection of bold animal prints, sporty diagonal stripes, graphic shapes, and romantic silhouettes.

Accessories that complement the collection including the Falabella bag, Elyse, Binx and Odette shoes alongside the eco-friendly eyewear fabricated from bio materials were prominently displayed.Staying true the designer’s commitment to sustainability every aspect of the collection has been considered to be made in an environmentally responsible way and is consistent with the vegetarian philosophy, completely cruelty free.

To commemorate the event, a limited edition t-shirt will be available for purchase for $35 exclusively in-store at Amoeba Music. 100% of the sales of the t-shirt will be donated to No-Kill Los Angeles, an initiative of Best Friends Animal Society whose mission is to end killing dogs and cats in LA city shelters.

About Stella McCartney
Stella McCartney is a 50/50 joint venture partnership between Ms. Stella McCartney and Kering established in 2001. A lifelong vegetarian, Stella McCartney does not use any leather or fur in her designs. The brand’s ready-to-wear, accessories, lingerie, fragrance, kids and adidas by Stella McCartney collections are available through 49 other free-standing stores including London, New York, Los Angeles, Tokyo, Hong Kong, Paris and Milan as well around 600 wholesale accounts in key cities worldwide.
For more information about Stella McCartney, please visit www.stellamccartney.com 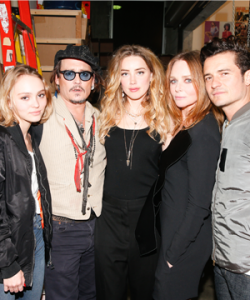