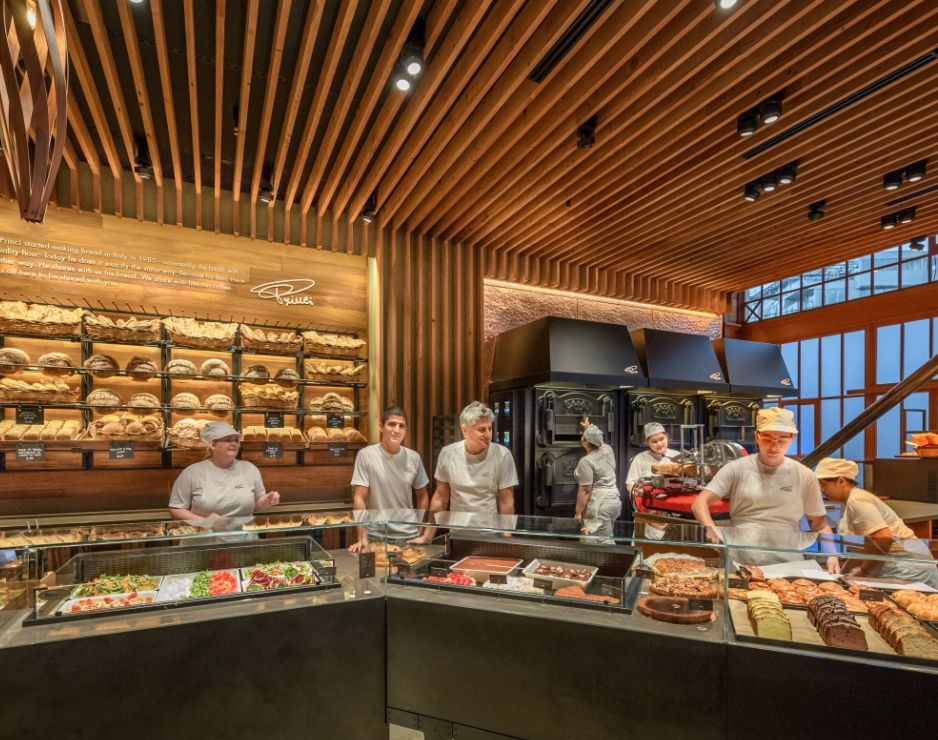 Starbucks opens the first Princi bakery location in the U.S. at its Starbucks Reserve Roastery in Seattle

Seattle, 2017-Nov-08 — /EPR Retail News/ — Starbucks Coffee Company (NASDAQ: SBUX) today (November 7, 2017)  announced the opening of the first Princi bakery and café location in the United States at its Starbucks Reserve Roastery in Seattle. The Roastery opened in December 2014 as an homage to coffee, a completely immersive and sensorial space that redefined customers’ expectations of a retail environment. Completing this new customer experience is the introduction of Princi, offering freshly baked Italian food crafted from Rocco Princi’s recipes, which has gained a devoted following in his six stores across Milan and in London’s Soho neighborhood.

Princi will become the exclusive food offering in all new Starbucks Reserve Roastery locations including Shanghai, opening in December 2017, Milan in late 2018, and New York, Tokyo and Chicago thereafter.

“Rocco Princi is an artisan who, at an early age, discovered a love of bread making and through determination as well as an obsession for finding the perfect ingredients, has created an Italian food experience that I think is unparalleled,” said Howard Schultz, executive chairman, Starbucks. “His passion for authentic food and respect for Milanese culture come through in everything he does, and I think our customers are going to fall in love with Princi.”

Born in Calabria, Italy, Rocco Princi began as a baker’s apprentice and opened his first store at the age of 21 in the Villa San Giovanni. With the motto, “hot bread all day,” demand quickly exceeded his expectations and Rocco moved to Milan, opening a shop in 1986. Designed with ovens as the centerpiece of his stores, Rocco Princi and his team bring the theatre of baking to life using simple, yet sacred artisanal techniques, and exceptional ingredients sourced specifically for each fresh food offering. Sourced without compromise and baked without shortcuts is what defines Princi food.

At the newest Princi location in Starbucks Reserve Roastery in Seattle, a team of bakers and chefs bring over 125 years of experience to Princi recipes. Much like Rocco’s European locations, the Seattle store is centered around ovens with food across every daypart baked fresh onsite. More than 100 menu items – from flaky cornetti to focaccia sandwiches filled with salame Milano and mozzarella di bufala or crostata fragola – will be available daily, using ingredients imported from Italy, 25 of which are specifically for Princi. The food will be displayed in abundance as a Commessa guides customers through the breadth of offerings.

“Today, I am realizing a dream that I have had since I was a young man, and I am grateful to Howard for his vision to bring Princi to the world,” said Rocco Princi, founder, Princi. “Having worked side by side with the team that Starbucks has assembled, I have seen firsthand their talent as well as the attention they have given to ensuring that the fresh, authentic, handcrafted ingredients that define the Princi experience are being honored. I am excited and humbled that the people of Seattle will now be able to experience our food.”

In 2016, Starbucks announced that it had joined a global investment team – which includes Milan-based Angel Capital Management and Pekepan Investments – to expand Princi bakeries into international markets. In addition to the Starbucks Reserve Roastery locations, Starbucks plans to open Princi standalone stores starting in 2018.

Princi is a Milanese institution built around baking a range of quality hand-made, wood-fired breads. You can learn more at http://www.princi.com/

Founded by Angelo Moratti together with Paolo Gualdani, Angel Capital Management is a Milan-based private investment firm that provides long-term growth equity for global companies in the consumer and lifestyle sectors. More information on www.acm.capital.

Pekepan Investments is an independent European investment group owned by private investors, which have historically have invested alongside Angel Capital Management.

Since 1971, Starbucks Coffee Company has been committed to ethically sourcing and roasting high-quality arabica coffee. Today, with more than 27,000 stores around the globe, Starbucks is the premier roaster and retailer of specialty coffee in the world. Through our unwavering commitment to excellence and our guiding principles, we bring the unique Starbucks Experience to life for every customer through every cup. To share in the experience, please visit our stores or online at news.starbucks.com and Starbucks.com.

Chicago Reserve® Roastery to be the third in the U.S. and sixth internationally for the company as Starbucks continues to transform the global coffee industry

SEATTLE, 2017-Apr-29 — /EPR Retail News/ — Starbucks Coffee Company (NASDAQ: SBUX) today (April 26, 2017) announced it will open a Starbucks Reserve® Roastery in Chicago in 2019. Located on North Michigan Avenue and Erie Street on Chicago’s Magnificent Mile, the Chicago Reserve® Roastery represents the company’s third Roastery location in the U.S. following Seattle, which opened in December 2014, and New York City, which is on track to open in 2018.  The company also plans to offer customers multiple international Roastery experiences, including Shanghai, opening late 2017, alongside Milan and Tokyo, slated to open in 2018.

“Having opened our first Starbucks store in Chicago nearly 30 years ago, our first outside of Seattle, this is a very special city for me. At the time, it was a true test for Starbucks because the Chicago customer is so savvy and discerning about their coffee,” said Howard Schultz, Starbucks executive chairman. “Chicago is a city of neighborhoods, so we took our time to find an incredible space to match the unprecedented coffee experience our premium Roastery will offer. To be located on one of the best-known retail streets in the world is a proud moment for all of us and we can’t wait to bring Chicago and the world a coffee experience worthy of their most premier real estate.”

“Chicago’s Magnificent Mile brings in millions of visitors from across this globe and is the perfect location for a world-class coffee destination,” Chicago Mayor Rahm Emanuel said. “This Starbucks Reserve Roastery will be an investment in Chicago and a strong addition to Michigan Avenue, where residents and visitors can enjoy incredible coffees from around the world in a remarkable environment.”

Much like its flagship Seattle location, which was the most successful store opening in the company’s history, the new Chicago Roastery will be a fully sensorial coffee environment dedicated to roasting, brewing and packaging its rare, small-batch Starbucks Reserve coffees from around the world. Tailored to the Chicago customer, the interactive four-story, 43,000-square-foot space will also be designed to bring coffee craft to life by offering multiple brewing methods, specialty Reserve beverages and mixology.

“Howard and I share the same passion for the companies we created, each centered around the customer experience and a relentless attention to detail. This building has a unique way of becoming a beacon for a brand, and I can’t think of a better retailer than Starbucks to offer Chicago something new and exciting with its Reserve Roastery,” said Gordon Segal, founder, Crate and Barrel.

As announced at the company’s December Investor Day, Starbucks will also include fresh baking on site in all Reserve Roastery locations courtesy of Italian baker Rocco Princi. Known for his artisan breads created from traditional family recipes, Princi’s handcrafted food pairs perfectly with Reserve coffee, elevating every daypart – breakfast, lunch and dinner in all Starbucks Roasteries. Princi food will also be available in the company’s new Reserve stores, a retail concept inspired by the Roastery but not yet open to the public.  Starbucks has announced a Reserve store coming to the West Loop in Chicago in 2018 and Seattle in 2017. During last year’s Investor Day, Starbucks confirmed that it would open 20-30 Roastery locations globally over time and up to 1,000 Reserve stores.

The premium Starbucks Reserve brand is also coming to life in Starbucks stores with the inclusion of Reserve experience bars in select locations worldwide. Currently, there are 20 Starbucks stores in the U.S. with Reserve bars – three in downtown Chicago and one in Lake Forest, Illinois. This spectrum of Starbucks retail experiences is not new for Chicago: Since opening in 1987, the Chicago customer has seen many firsts from the company, including early iterations of the third-place experience, modular Drive Thru stores made from shipping containers, an express format focused on the commuting customer and, more recently, the opening of its first store in Englewood, providing job skills training to youth in addition to investing in local women- and minority-owned businesses while creating dozens of Chicago-area jobs.

Since 1971, Starbucks Coffee Company has been committed to ethically sourcing and roasting high-quality arabica coffee. Today, with more than 25,000 stores around the globe, Starbucks is the premier roaster and retailer of specialty coffee in the world. Through our unwavering commitment to excellence and our guiding principles, we bring the unique Starbucks Experience to life for every customer through every cup. To share in the experience, please visit our stores or online at news.starbucks.com and Starbucks.com.

Princi is a Milanese institution built around baking a range of quality hand-made, wood-fired breads.  You can learn more at http://www.princi.com/