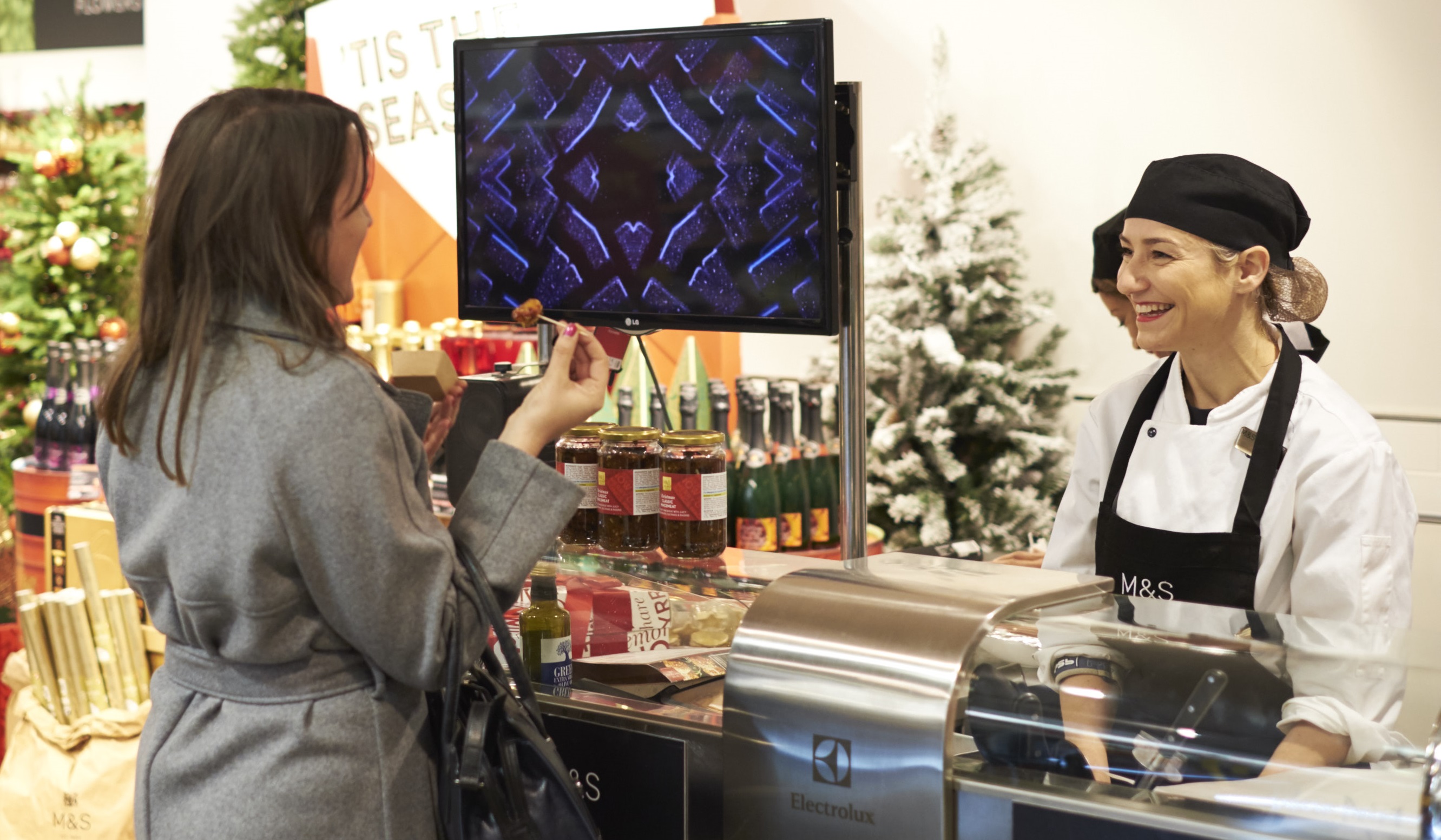 LONDON, 2016-Dec-02 — /EPR Retail News/ — M&S is hosting a Taste of Christmas event in its foodhalls across the UK from today (01 Dec 2016) until Saturday 3rd December. Today also sees the release of its final Christmas food advert – ‘Tis the season… for all day feasting.

The team of food experts at M&S have created a must-have collection for festive entertaining. Customers will be able to sample show-stopping canapés, sophisticated snacks, desserts and drinks that are only available at M&S.

The three day Taste of Christmas event, taking place at 600 stores, offers a great opportunity for those looking for inspiration to try special and new products that help them plan their Christmas dining. In-store experts will be on hand to advise customers on combining plates, canapés and drinks.

There is a treat available for every moment during the festive season including Twice Smoked Salmon Blinis that make the perfect breakfast treat, Mini Porcini Mac ‘n’ Cheeses to spoil party guests, Salted Caramel Profiteroles and special Christmas Smoked and Spiced Cheeses to follow the main event. Drinks on offer have a suitably festive twist with Mince Pie Martinis, Christmas Cake Liqueurs and the American inspired Christmas Cobbler, which is the ultimate contemporary sherry cocktail.

Sacha Berendji, Director of Retail at M&S said: “The taste events are a great way for our teams in stores to make the run up to Christmas special for our customers. With 290 new food products on offer this Christmas, the event gives customers a chance to try some exciting treats and get into the festive spirit.”

This year’s series of four ‘Tis the Season food ads tap into the key moments for customers this festive season. The final ad released today, ‘Tis the Season… for all day feasting, focuses on preparing all the essentials for the big day. The beautiful food shots show off the very best of M&S this Christmas and are complemented by a festive twist of the popular and iconic Clean Bandit track.

The call comes after an MCS survey published last week showed that litter on British beaches rose by 6.4% last year.

The 4th annual Big Beach Clean Up will clean 135 beaches and canals up and down the country between the 7th and 13th May with over 8,000 people (3,000 M&S employees and 5,000 M&S customers) expected to take part. Last year 250km of coastline and canals were cleared with 4,000 bin bags full of litter collected.

Customers can find their nearest beach clean and sign-up at www.mcsuk.org/foreverfish.

Most of the litter collected will be common waste items such as wrappers, drink bottles and lids as well as fishing lines. It is also likely to include wet wipes, with last week’s MCS survey reporting a 50% rise in the number found on beaches in 2014 compared to the previous year.  Last year’s Big Beach Clean-up cleared 10,950 cotton buds, 21,900 wrappers and 55,600 plastic pieces. Cleaners also found an array of unusual items including false teeth, a hammer, a plastic leg, two motorbikes, a Smurf, a breast implant and an Action Man.

Sacha Berendji, Director of Retail at Marks & Spencer, said: “The Big Beach Clean Up is a great way to support the community and help safeguard the future of UK fish stocks. Clean waterways and beaches mean clean seas and our store colleagues up and down the country will be making preparations to clean their local beach or canal. We want as many customers as possible to be alongside them in May, it’s a simple, fun way to volunteer and make a difference.”

Samantha Fanshawe, MCS Chief Executive, said: “The Big Beach Clean-up has grown year on year, involving thousands of amazing volunteers ready to don gloves and bags and pick up the rubbish left behind by others, washed down from rivers or discarded from fishing boats and ships.  Beach litter levels around the UK are sadly increasing – by over 6% according to our most recent UK survey.  This fantastic partnership between M&S, charities and communities raises awareness of the issue and the need for nation-wide action across government, industry and voluntary sectors to stop litter at source.”

Richard Parry, Chief Executive at the Canal & River Trust, said: “Canals are havens in our towns and cities.  They are home to many endangered and much loved wildlife as well as places for people to get away from it all.  Local communities already do so much to help us look after the waterways, and it’s particularly good to have the support of M&S to keep them special places.”

The M&S Big Beach Clean-up is part of M&S’ Forever Fish campaign which is funded by the profits from the 5p carrier bag charge in M&S foodhalls. Since its introduction in 2008, the charge has reduced carrier bag use by 75 per cent and raised over £8 million for good causes.

Since the M&S Big Beach Clean-up began in May 2012 over 20,000 people have taken part and 62.5 tonnes of litter – the weight of Challenger 2 tank – has been cleared from our canals and beaches.

Forever Fish is funded by the profits from the 5p carrier bag charge in M&S Foodhalls. The objectives of the Forever Fish campaign are to

The Marine Conservation Society (MCS) is the UK charity dedicated to protecting our seas, shores and wildlife. MCS campaigns for clean seas and beaches, sustainable fisheries, and protection of marine life. Through education, community involvement and collaboration, MCS raises awareness of the many threats that face our seas and promotes individual, industry and government action to protect the marine environment. MCS produces the annual Good Beach Guide, the Good Fish Guide and Fishonline on sustainable seafood, as well as involving thousands of volunteers in projects and surveys such as MCS Beachwatch and The Big Beach Clean-up. For further information, please visit: www.mcsuk.org.

The Canal & River Trust is the guardian of 2,000 miles of historic waterways across England and Wales, caring for the nation’s third largest collection of listed structures, as well as museums, archives, and hundreds of important wildlife sites.

We believe that living waterways transform places and enrich lives and our role is to make sure there is always a place on your doorstep where you can escape the pressures of everyday life, stretch your legs and simply feel closer to nature. www.canalrivertrust.org.uk