ABU DHABI, 2015-12-14 — /EPR Retail News/ — LuLu Hypermarket has been bestowed with the annual Sheikh Khalifa Excellence Award SKEA, which honours government and private organisations that set and follow the best all round business practices in various fields. The award was presented by HH Sheikh Hamed Bin Zayed Al Nahyan, Chief of the Abu Dhabi Crown Prince’s Court, at a glittering ceremony at the Emirates Palace Hotel in Abu Dhabi on 9 December 2015.

The award was received by Mr. Ashraf Ali M.A., Executive Director, on behalf of LuLu Group. Speaking to the media, Ashraf Ali said, “We at LuLu have always believed in setting new benchmarks in retailing and always try to bring innovation in all spheres of our business. We are very honoured to have been selected by the SKEA jury and would like to thank all our loyal shoppers and business associates for their continued support.”

LuLu Hypermarket is the only retailer to be selected for this prestigious award. Other winners this year include UNB, Emirates Islamic Bank, and Mafraq Hospital. 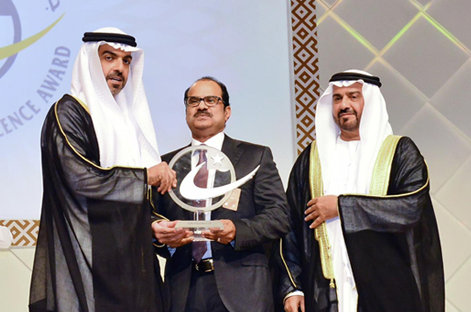