The community retailer will invest over £160 million in new stores and major makeovers for a further 150 of its outlets.

More than 20 new stores are set to open in London, and up to 18 stores are planned for Scotland including: stores in Glasgow; Edinburgh; Forres (Highlands) and Kilmacolm (Renfewshire).

Rhayader (Powys) and Bryncoch (Neath) will be the first of ten new stores which are set to open in Wales. While other new stores are lined up for Blackpool; Bristol; Chesterfield; Crewe; Leicester; Manchester; Nottingham; Plymouth; Southampton and York among other towns and cities.

The news follows twin announcements last month as the Co-op confirmed it had reached an agreement to become exclusive wholesale supplier to the 2,200 stores across the Costcutter Supermarkets Group network from spring 2018. While members of Nisa Retail also voted in favour of the Co-op’s offer to buy the delivered wholesale and convenience retail specialist, a move which is conditional on Competition and Markets Authority (CMA) approval.

Jo Whitfield, Chief Executive of Co-op Food said: “The Co-op is positively responding to the changes occurring within this dynamic sector. Our Food business is going from strength to strength in what is clearly a challenging retail market. We have the ambition for our stores to be at the heart of local life, bringing communities together and offering our Members and customers great quality products when and where they need them.”

Stuart Hookins, Co-op’s Director of Portfolio and Development, said: “The Co-op’s extensive acquisitions and refit programme is a fundamental part of our food strategy. Moving forward with a clear purpose and momentum, our expansion plans for 2018 will mean that the Co-op is on track to have opened at least 100 new stores in each of three consecutive years. With over one million new active Members joining us in the last year, we are always looking for new locations to get closer to where our Members and customers live and work and to meet their shopping needs conveniently. Our Members are now telling us where they would like to see a new Co-op store opening to serve their community through our suggest-a-site website.”

The new-look stores will see the Co-op – which this year won the title of Convenience Retailer of the Year in the Retail Industry Awards – focus on offering a wide range of fresh, healthy foods, meal ideas and essentials, alongside increased ranges of own-brand and locally-sourced produce.

The Co-op– which has reverted to its iconic “clover-leaf” design log, first used in the 1960’s – also brings a funding boost to good causes at each of its stores. Members receive a 5% reward when they buy own-brand products and services and, the Co-op donates a further 1% to local community groups. This year (2017), the Co-op shared £20M with around 8,000 local groups, charities and good causes who make a difference to community life.

Co-op Members can say where they would like to see a new store opening to serve their community by visiting: https://www.coop.co.uk/forms/suggest-a-site

MANCHESTER, England, 2016-Jan-20 — /EPR Retail News/ — The Co-op team is kicking off 2016 with the launch of two shiny new stores in Huntington (Staffordshire) and Kirkcaldy (Fife). Although over 300 miles apart, the aim both is simple – offer good food, served by friendly people in a format that is easy to shop.

Stuart Hookins, Director of the Portfolio, Acquisitions and Location Planning, comments:
“2015 was a great year for us in terms of the quantity and quality of stores we delivered and this year is going to be even better. By the end of the month we will have opened five new shops, two more than we did in January last year. And we’re starting as we mean to go on – we want to open over 100 stores in 2016, comfortably more than any other UK food retailer. We are in the middle of the biggest new store development program the business has ever seen, so it’s an exciting time for the Food team.”

Pupils from Littleton Green Community School and Staffordshire firefighters attended the opening of the Huntington store, whereas the Kirkcaldy store was opened by 95 year old life-long Co-op shopper, Nellie Gordon (pictured below at the store opening). 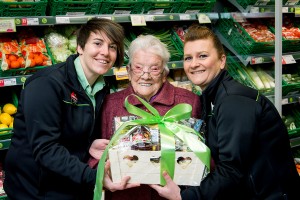