“The new DC will be servicing 300 New World, PAK’nSAVE, Four Square and On the Spot stores throughout the South Island,” says John Mullins, General Manager Supply Chain, Foodstuffs South Island Ltd. “From as far afield as Collingwood and Stewart Island the distribution network sees 200 trucks leave the DC every day and travel a massive six million kilometres around the country each year.”

“Across the new ambient section of the site 400 staff distribute over 450,000 cartons of product out to our supermarkets 24 hours a day, seven days a week,” says Mullins. “The temperature controlled warehouse adds another 210,000 cartons each week, with the total number of cartons distributed rising to as many as one million at busy times such as Christmas and Easter. No easy feat by any means.”

According to Mullins 70% of goods supplied to the supermarkets comes from the DC with the remaining 30% going direct from suppliers.

“An effective supply chain requires multiple components to work in harmony and we would be remiss in not taking this opportunity to thank our suppliers who have worked with us throughout the development of Hornby and transition from Papanui. Getting the new DC stocked and the state of the art fulfilment software functioning correctly was always going to be a challenge and we wouldn’t have been able to be so successful if we didn’t have the support and cooperation of our supplier community,” acknowledges Mullins.

“Additionally, our distribution centre staff have played a very important role in the set-up of the new DC, in particular assisting with the transition of inventory and order picking from the older Papanui site to Hornby.”

The relocation of 200 Papanui staff across town to the new site at Hornby in late 2014 was a great achievement with staff now enjoying the benefits of a new purpose built building. Highlights include a full service cafeteria and modern amenities such as exclusive use of an onsite gym.

Constructed by Calder Stewart Industries and designed by local engineering firm, Engenium, the building underwent a rigorous design process to ensure it achieved the highest earthquake building standards. Adding to this the regular earthquakes experienced by the Canterbury region meant it was important to design a building that delivered the safest pallet racking solution possible.

“We enlisted the expertise of Dematic, a material handling and logistics automation company based out of Luxembourg with a manufacturing plant in Sydney, to install the ColbyRACK storage system which is purpose built to deal with the forces generated by seismic events,” says Mullins.” Through close consultation with the structural engineer Dematic were able to ensure that the specially constructed post-tensioned concrete floor did not conflict with the positioning of the racking systems seismic base plates, thus ensuring the racking system will behave predictably during earthquake events.”

Foodstuffs South Island has also worked with Dematic to install a state of the art order picking system, or tool to ‘pick’ products from the DC shelves for distribution out to the supermarkets. Dematic’s PickDIRECTOR includes a semi-automatic ‘pick module’ which handles all split case and small carton order requirements via a series of zone routing and sortation lanes over both the ground and mezzanine floor levels within the DC. Orders are picked into collapsible tote’s for distribution to stores across the South Island. 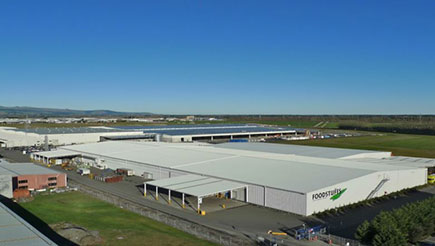