Seoul, Korea, 2015-10-8 — /EPR Retail News/ — The Starbucks Community Store in the Daehakro neighborhood in Seoul, Korea, commemorated its one-year anniversary (October 7, 2015) with a community service project, a donation and free brewed coffee and rice cakes for 365 customers as a token of gratitude.

The Starbucks Community Store in Daehakro, like the Langsuan Neighborhood Starbucks in Bangkok, plays a role in supporting education, job training and apprenticeship initiatives by working directly with non-profit organizations to offer local services. In the United States, Starbucks will soon open similar stores that partner with local nonprofit organizations to provide skills training for opportunity youth in underserved, low-income communities in Ferguson, Chicago, Queens, Phoenix and Milwaukee.

A social hub in the education and arts district of Seoul, the Daehakro coffeehouse hosts workshops and seminars and monthly volunteer activities called “green care” dedicated to improving the environment. The store’s design reflects its vibrant neighborhood. “Community Store messaging can be found throughout the location and it’s a conversation piece that engages customers with store partners,” said Yena Cho, who has been focused on the operation since she joined Starbucks two years ago.

An art-wall collage, created by university students, and a digital community board that showcases corporate social responsibility efforts are among the distinctive touches that align the store with its surroundings. Also on display is a 3D coffee mug wall that represents students from the Starbucks Comprehensive Youth Leadership Program.

Yena, who is a global communications manager at Starbucks Korea, said the first year of operation for the Daehakro Starbucks passed by quickly, aided by a flurry of activity around the store, a positive reception by the community and significant media interest.

Since its opening last October, the equivalent of 30 cents U.S. from each item purchased in Korea’s Community Store has benefited the Green Umbrella ChildFund Korea to support lifelong skills development for youth through the Starbucks Comprehensive Youth Leadership Program. A donation of $100,000 U.S. accumulated from a portion of sales over the past year was presented to Green Umbrella ChildFund Korea at the anniversary celebration. The program offers academic scholarships through graduation for a curriculum that focuses on business skills, collaborative communications and social consciousness.

Starbucks Korea, which is the company’s fourth largest market outside the U.S., and the Green Umbrella ChildFund Korea maintain an ongoing alliance to address the nation’s social and community needs with an emphasis on assisting young people seeking work. Korean tuition costs are among the world’s highest, creating roadblocks to higher education for the nation’s disadvantaged.

“Being a relevant part of the community we serve in is an important part of who we are,” said S.K. Lee, ceo and president of Starbucks Coffee Korea. “Our Community Store is a telling example of our commitment to building a different kind of company in Korea that is performance driven through the lens of humanity.”

The focus on finding jobs for youth is an extension of Starbucks global commitment to hiring Opportunity Youth — those between the ages of 16 and 24 who aren’t in school and aren’t working.  The 100,000 Opportunities Initiative, a coalition of 33 leading U.S. companies including Starbucks, is America’s largest employer-led private sector coalition committed to creating pathways to employment for young people. The businesses will host the next Opportunity Hiring Fair in Phoenix on Oct. 30. 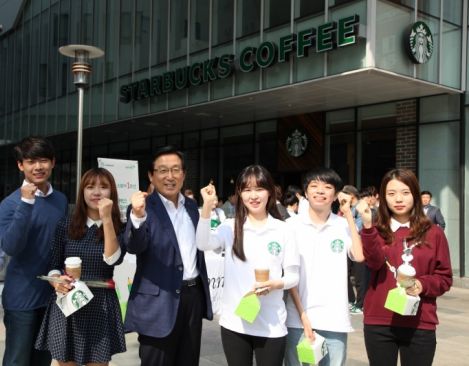